the 9 CONSTITUENTS of the BEING

the OCCULT ANATOMY
of the MAN 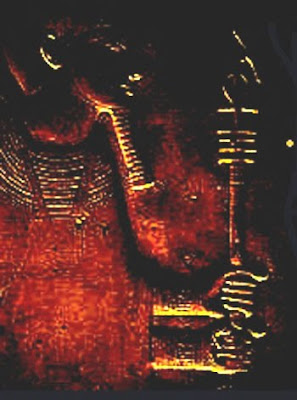 It is custom for explaining the 9 constituents to utilize the papyrus of lady Anhaï, the only artefact for the moment (to my knowledge) showing a "drawing" of the occult constitution of the human being.
We know, for whom is interested in esotericism, that the Man is the alive temple and in action of the Gods. Everything is in him. His body, his bodies are "miniatures" of the bodies of Ptah. And every part of this body is bound to a god protector, sort of divine tutor.
For me, I consider this papyrus, - or rather what it represents, as the real tree of life. Because indeed, before being occult body of the human being, every constituent is at first the original constituent, in other words, the divine body from which was born ours.
It's important to keep this in mind during all our study.
And afterward also.
Here is thus papyrus: 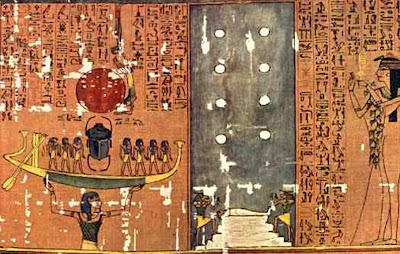 At the center of the papyrus, below, surrounded by two gods Knoum, the human body.
Above 8 spheres representing the subtle bodies, the constituents which besides Hermes will call the metals.
The spheres align themselves as the drawing shows. Click to enlarge. 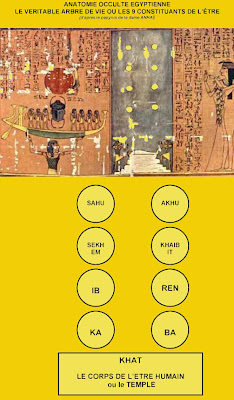 Brief definitions of the different bodies


These bodies were already treated in the message about the Ankh(Ptah -message 2) which group all of them.
I get them back here while developing them a little and specifically in the context of the occult anatomy and in the order which belongs to it.
Above, the bodies are placed in an order which is the one of the papyrus.
I give you them below in the usual western order not to add to the complexity of the study.


Microcosm of the universe, in him resounds every gift, every potential, every strength, every weakness also, engendered by the Universe and the Gods.
It is Rene Lachaud, I think, who explains that if one of the hieroglyphs which is linked to the physical body is constituted by a serpent, it's because it is the primordial vibration which one finds in the Man with Kundalini.


The human being is thus a bridge, a canal between the sky and the earth, between the Gods and him, between his Creator Enki and himself and thus between the matter and the spirit. Hence besides, and as we have already seen with the Lost Book of Enki, the standing position of the Man.


Khaïbit, the etheric double or very first body
One also calls it " the shadow ", not in the psychological meaning (our inner terrors), but indeed in the literal meaning.
Khaïbit is the first layer of the aura which surrounds the being and that one can perfectly observe because of the kirlian effect. 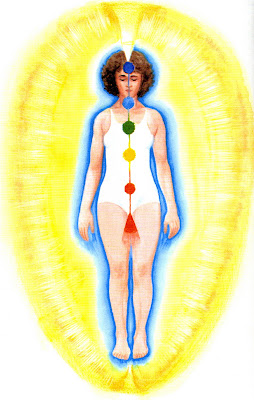 Above in this image extracted from one of Barbara Brennan's books, Khaïbit is the dark blue envelope around the physical body.
The Khaïbit is benevolent, it's in a way, the organic consciousness of the physical body.
He catalyses the vital fluid of Ka. He is supposed to protect Ba meaning to protect the physical body from any attack: diseases, epidemics, and to limit or to prevent the consequences of shocks and accidents.
Below, he is shown in black. 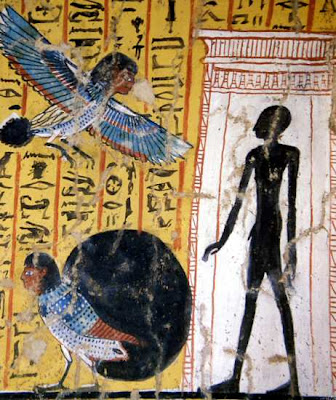 Ka, the etheric-astral body
please refer to the message which is specifically dedicated to him.


Bâ or the individual soul
(sometimes called " animal soul ")
Easily associated with the Bennu, the Bâ is the individual soul of the being, immortal, going from an embodiment to another one.
The shape bird of Bâ illustrates the volatility of the soul and the freedom to leave one's physical body.
Hence the importance of Anubis's role, when, during the rite of opening of the mouth, he allows the soul to escape from Khat. 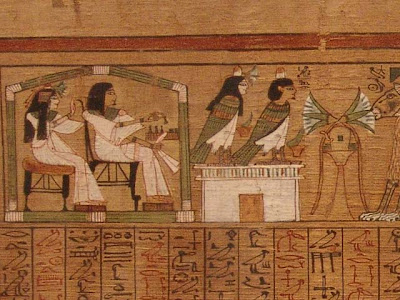 It's to the Ba that falls the transmission of the inheritance of the Ancestors.
The bird has by definition the power of flying. So it is an obvious link between the Heaven and the Earth. Consequently it seems logical that his physical vehicle, Khat, does the same, by standing, eyes towards the stars and feet on solid ground.
Failing to fly as such, the human being has the power to leave his body and to fly because of his astral body.


Ren and the vibratory chant of the soul
Please refer to the message 6 which is dedicated to him.


Ib and the 3 sources

Ib is often represented in ancient Egypt as a heart-shaped vase with handles in shape or evoking small wings.
Ib is the mental body. A little more actually, because he contains "the intelligence of the heart ".
I call him the body of the three sources because he is the source of intelligence, of the heart (= consciousness) and of the knowledge.
Intelligent understanding of all things, Ib brings a high vision of things.
Ib is a complete database, where are all the memories of the being, he is in the man's body, the personal akkhashic annals of the person. 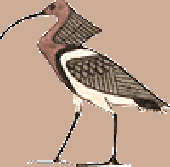 Sahu or the divine body of the being
Sahu is our Father Creator in us, our divine DNA.
Sahu is the best in "the whole "us.
By him, we are immortal in all our bodies, by him, we live in the supraluminous universe, free for ever. 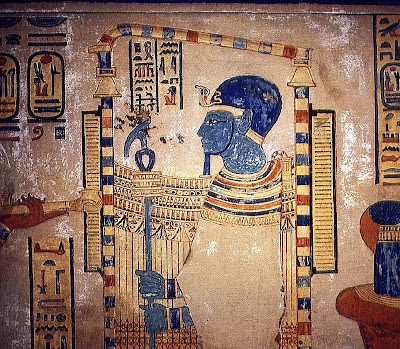 Sekhem, the cement of the subtle bodies
Sekhem is the strength of cohesion of the bodies between them, the binding agent.
As a result, Sekhem is fed by all the bodies at the same time and we better understand now why it's so powerful to say, when we ask for something to the gods:
" Sekhmen in... ".
He activates all the bodies and magnetizes more easily the asked object, situation or solution.


Do not forget that to cure or acquire something, it is necessary to work with all the bodies. If one of them opposes to your request, you become a "battlefield" between your own bodies, each of them taking to heart his role and his responsibilities.
It is always necessary to make sure, especially that the " normal ", the daily consciousness if you want, is in accordance with the astral and the mental.
These are the three aspects of the being that it is always necessary to maintain in cohesion, because we have from these bodies our thoughts and our beliefs.