" Our modern medicine owes a lot to the invaluable contributions
of the Egyptian doctors.
A multitude of antique documents, recently discovered,
shows profound knowledge in pathology, in anatomy, in surgery
and in other very elaborated techniques of care.
The idea which made of these precursors of science
simple superstitious is henceforth obsolete, outdated ".

Magic and antique medicine were born in Egypt.
This knowledge, led by the Great Egyptian Gods: Ptah, Thot.....largely influenced Greece and then the whole West.
Some of their understandings are today considered as determinedly modern because we forgot the source of their "modernity".
(Below, Ptah and Sekhmet receives Pharaoh). 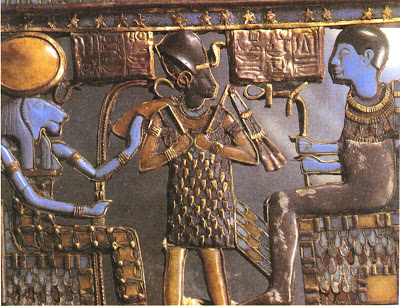 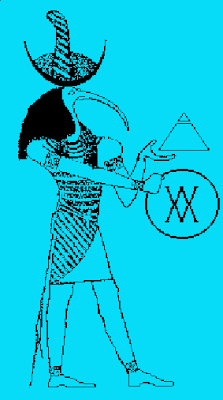 The Egyptian medicine was essentially based on the will to maintain the human body in harmony with the cosmos so that the body was the receptacle to lifeblood and to creative forces of the universe.
The physical envelope was indispensable for the after life, for that reason the absolute necessity to maintain it, healthy. The worst of the misfortunes, for an Egyptian of that time, was to die burned, because the body was lost...

Magic and science prevented the disease from affecting the entire body by practising a preventive medicine.
When the disease arose, often the patient was considered a victim of an hostile divinity or force (dissatisfied deceased, "black" magic practised by enemies, an opposed god).
Magic and science then united to fight the cause of evil and not its symptoms and calm the concerned entities.

The doctor prepared the curative potion, the magus endowed it with a force and a soul!

Under the protection and the teaching of Ptah and Thot, then Isis, the magicians-doctors integratedthe power of words, the power of rites while studying in depth anatomy and medicinal plants.

The medical magic evolution of Egypt was such, that Hippocrate left to study in the country of Pyramids. Also Galen and Theophrastus.

Then were found and published the papyri of Ebers, Kahoun, Berlin and Edwin Smith: for the first time, direct and indisputable sources showed that medical Papyri of anatomy and medicine treatiesexisted from the very Ist dynasty, attributed to the Pharaoh Atoti. They were thus written under the Ancient Empire that Ptah managed with great benevolence.

The treatment of cancer in the Ebers papyrus
wikipedia 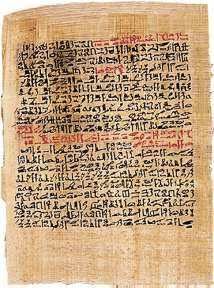 Manetho (or Manéthon) quotes them in his narratives.
On medical Ostraca, we also find texts / prescriptions or explanatory drawings.
(An ostraca is a fragment of limestone or of pottery on which the apprentice-scribe wrote or drew.)

The Egyptian medicine was theurgic, mid-scientist, mid-magic and brought surprising results.
This science was the particularity of Gods, transmitted to the Pharaohs and HighPriests and then to the doctors.

The organization of the cure was such in these old times that today, many historians and archaeologists speak about " beginnings of social medicine ".
Besides, the medical care was free, accessible to all, at any time and in the whole country. Public care prematurely!
Do not forget the houses of life about which speaks already Enki in The Lost Book, posterior to Egypt and that we find throughout the Pharaonic Egypt.

In medicine as in surgery, the diagnosis was developed and reliable : observation, palpation, auscultation.
(Below a surgical pliers).

Then, if necessary, the doctors turned to the magus who acted: conjurations, enchantments.
The unification of these practices were made in the concrete treatment offered to the patient:
. medicines of animal origin (blood, sperm, fat....)
. mineral (bicarbonate of soda, feldspar, carbonate, sulfur...)
. and especially vegetable.
. balneotherapy, salty baths 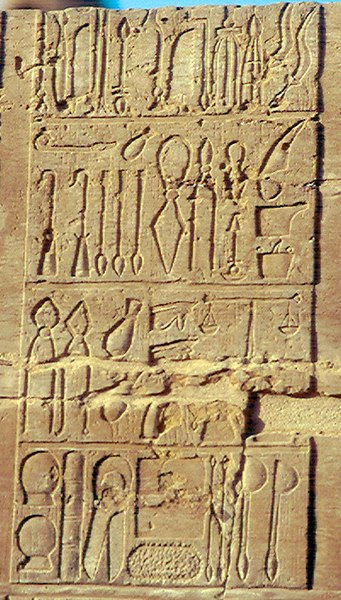 The Egyptian doctors invented, under the aegis of the Gods; the extirpations, powders, pills, ointments, plasters, diverse mixtures, rectal and vaginal suppositories, rectal injections, massages, bandages and splints!
(Below bowl in alabaster which was used for collecting oil) 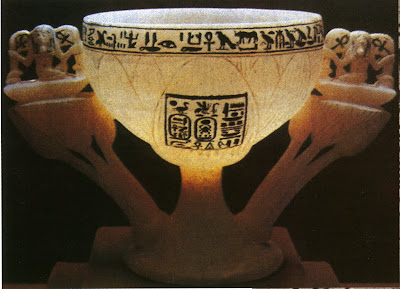 Precise regulations about hygiene and well-being were transmitted from cities to cities.
They concerned food and drinks, diets, sexual relations, puericulture, hygiene for individuals and housing!
The Egyptians boiled the water, shaved their body to avoid tiny creatures (Ndt: as parasites), and by hygiene were circumcised.
(Then the Hebrews made of it a religious rite which has no original foundation). 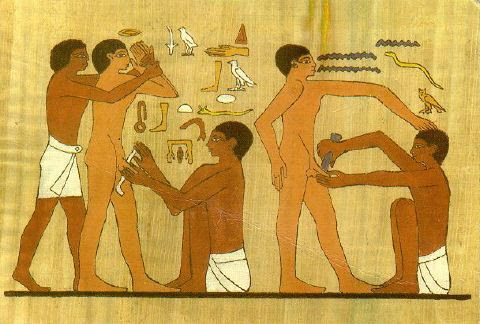 (Below scene of childbirth painted on the grave of the doctor Ankmahor, 6th dynasty) 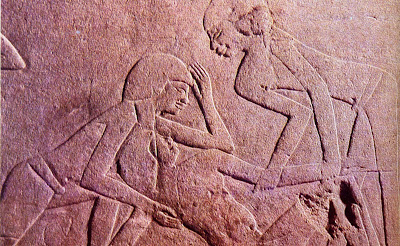 There were, as it is said, three big "orders" of doctors:
. the sounou, laic, who practiced outside the temple. Their tutelary God is Thot. They are itinerant at first, and move towards the patient. Then, he can practice at home or enter a temple.
. the ouabou-sekhmet who are totally devolved to the goddess Sekhmet, goddess of cure, spouse of Ptah in Memphis.
(See how much it is limited to consider Sekhmet only as " goddess of war"...)
These doctors practice in the temple and are also the official doctors of Pharaoh. 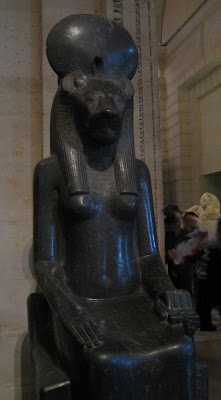 . the exorcists doctors who act by incantations and rites while knowing the medicine and thus knowing where to "hit" magically, which organ.... to extirpate the "evil" from there.
Pioneers of the anatomical terminology, (more than a hundred of terms) the Egyptians doctors or magus created the compared anatomy. Between that of the human being and that of the ox for example.
They were also experts in pathology and authors of tremendous descriptions and clinical charts.
They were not only capable of indicating remedies for every disease, but also of specifying doses, their preparation and how to administer them for a maximal efficiency.

For example, Edwin Smith's papyrus shows perfectly the advanced notions that Egypt had about the nervous system, the meninges and the cerebral convolutions!
The Mesopotamians gave a special place to the liver and to the blood. The Egyptians to the heart.
(In fact, on the occult plan, the liver filters the astral energies. The blood is the support of the soul and of the DNA. The heart is the temple of the god who lives in it: Ea/Enki/Ptah.)
Moreover,
In Memphis, dedicated city to Ptah, were sacred libraries containing all the possible erudite works, as the exceptional room of scrolls of the temple of Ptah. 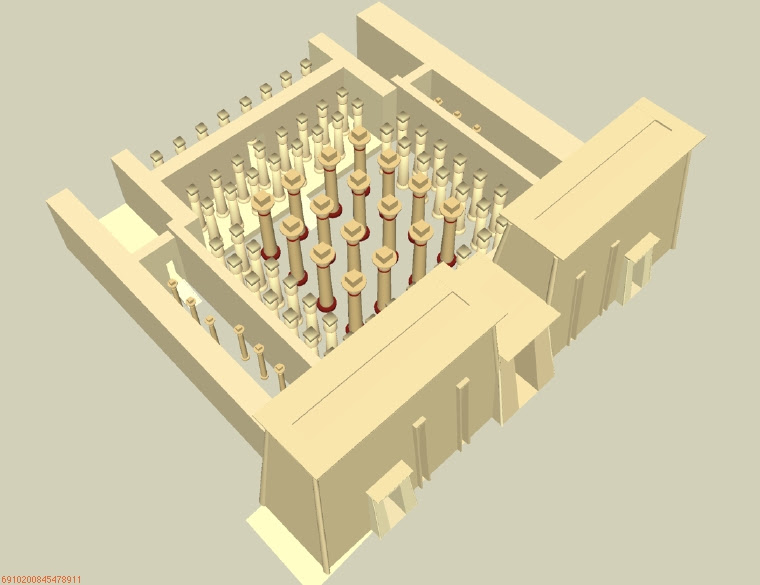 Sanatoriums-temples were dedicated to diverse deities where all the patients of the country rushed.
Elaborated techniques would have been given by Ptah to the doctors, as the hypnotic sleep, the calming and healing or how to fight the " occult illnesses ".
This place inspired then the Greek hospitals-temples dedicated to Asclepius.

42 sacred hermetic books, guarded in the temples by the priests, today are lost.
Furthermore, let's note, that, as usual, the religious jealously wanted to keep the knowledge for them. So they contributed to the loss of an inestimable ancestral knowledge of which we retrieve hardly today the first beginnings.
Indeed, it's still heretical to seek the cause rather than the symptoms, to consider the patient in a comprehensive way, with the whole experiences he (she) lived through, in a holistic way, or to carefully listen to him (her) in order to adapt the proper diagnosis and remedies to his (her) deep feelings.
Glory to Ptah!