IS JESUS ENKI ? !
Or how to compare the incomparable

If you come regularly on my newborn blog, you have noticed that I always speak about Ea / Enki as a compassionate being, loving his Creation, devoting to it. He has an absolute integrity, a perfect clarity. With Enki, things are clear and straightforward, the facts revealed, the responsibilities of everybody, including his, recognized and accepted.
Enki is love. 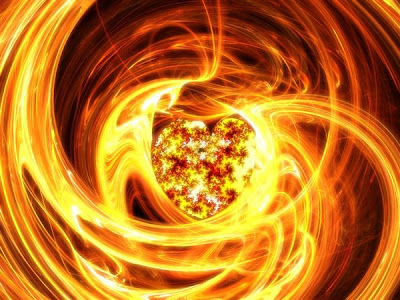 But this does not mean at all that he is Jesus.
Jesus does not get the monopoly of love and self-sacrifice.

Somebody asked me the question: can Enki be Jesus?
NO. ABSOLUTELY NOT.

Jesus was a foolish exalted being. Maybe even a communist prematurely. He preached the good word, "revealed" the Gospels which condemn love, sex, wealth and comfort. He abandoned without regrets his troops and glorified the self-abnegation in contempt of any respect for the human and his (her) intrinsic difference.
Jesus? A subdued. An intellectual, a good communicator. Today he would be Master of NLP ( neuro-linguistic-programme) or Minister of Social Affairs and Housing spending his time in meetings with his council and sharing cakes and drinks.

Enki is a warrior.
He claims for Him as for the humans the right for love, for the gifts of the Nature (which he has created), for the pleasures of the life. He also exhorts the men to more awareness and consciousness, to the liberation of bodies, spirits and souls by inciting each of us to love ourselves and to accept ourselves such as we are. He appreciates the diversity and the difference, that is why he created a luxuriant nature, diverse races and a very colourful world. 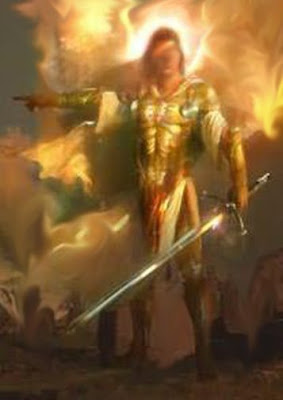 Enki has "revealed" no book.
Because he has no dictates or "commandments" to be transmitted. Or to impose. By torture and genocide, as the Crusades or the Inquisition have shown.
He relies on our common sense. He trusted us. Because we come from him and because he has placed in each of us the spark of consciousness, intelligence and desire for progress, which eventually leads us to ask ourselves the right questions. And find-finally-, the right answers.

Enki, Jesus? Are you kidding !
Enki acts alwas as a rebel because he follows his heart and feelings. He behaves always consciously. Even if to respect his feelings, he must defy the familial and royal authority. Never he gave in any of his core values. And always he supported and saved our race from slavery and submission as from floods and others devastations.

Enki is not a prophet. He is a GOD.
He does not make us endure brainwashing, or does not oblige us “to turn the other cheek”, to abdicate our personal power of making decisions and actions?
He refuses to make us feel guilty and to let us "massacre ourselves” for mistakes of which we are not responsible. He knows that the human beings ARE NOT at the origin of the Cosmic Evil.
Come on.Please think a little bit.
Enki the Wise, the Seer, Enki “the Right” requires us to beat our breast, day after day, on the foolish song: "It's my fault, it's my very great fault"?

How can we reach such conclusions, and have so little knowledge or discernment to say such stupidity? Everything separates Enki from Jesus. Everything, absolutely everything.

Enki is a Nephilim. He is proud of. He assumes his origins. He knows that too much humility means disguised pride.
Enki is a god. An extraterrestrial being whose science, technology and psychic gifts transcend ours from hundreds of thousands of years.
Why would he die on the cross in Palestine ?
Enki is a pragmatic being with sense of what is useful and essential. He acts in the field (meaning he experiences things himself), builds, moves on, helps, teaches and supports people. He does not "die" on the cross. To so-called "save the world." He is not mentally disturbed. And never will be.

Enki has suffered the political extravagances of his royal family. He was dispossessed and despoiled. He has also endured the anathema to remain faithful to the human beings. He " did not save the world " by dying on a Roman cross but rather by fighting in the field, still today. 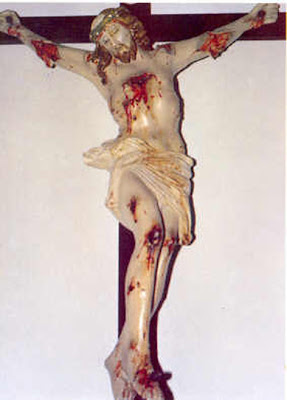 (when I think that our children grow up with this kind of picture of horror constantly in front of their eyes ...).

He has no interest in "dying" to prove his divine status to the world. He disagrees with this kind of show.
Enki is an outstanding scientist. He does not run the roads to multiply breads and fishes, he prefers to teach us how to make bread and catch fishes.
He does not allow anyone to seize him as a swine to be flogged by centurions with a consciousness of protozoon. He prefers to build Sumer and Egypt to show to mankind what the humans are capable to do with Him.

Enki has been betrayed by his own Judas. He fought them the sword in one hand, wisdom and forgiveness in the other.
He does not glorify the poverty as a state of higher consciousness because he knows that poverty is a mental disease.
He does not promise the paradise to the unfortunate because he has the courage of his actions and to tell the truth. And those who say the truth are blamed and cursed.
But from curses and ostracism, he released himself. Fighting, never despairing, always persevering.
Enki is a God who persists.

Enki WILL NEVER BE Jesus.
Because he loves life. Because he is Alive. Because he knows that the sacrifices and theimmolations are for the primitive. And that God has no only one son, but billions.

Enki is our true Father. Legitimate and loving.
Everything else is fantasy, a universal lie repeated, in contempt of all what we are in order to enslave us better, to destroy us. We live since millennia muzzled, submitted to the Bible and the Gospels. All this make us feel deeply guilty for everything by a religion that has soiled our flesh and our blood.

Personally,
I choose Life.
I choose Freedom.
I choose Enki.
I recognize him as my only father, only God and Creator of our race and our planet.

Some humor to conclude:

"For sure he was a jewish (Jesus), he lived with his mother until 33 years. He believed what she was a virgin and she thought he was God."
(Michel Boujenah)

" I went to Lourdes with my wife. No miracle took place. I came back with her”.
(Seymour Brussels, french humorist)

" The sole chief of state who comes back from Africa with money is the Pope.