BASTET
or the Hundred Divine Gifts 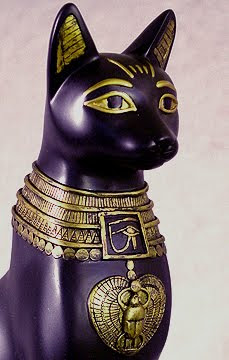 I - HISTORY OF THE CAT
The ancestor of the feline would be the Proailurus, small European arboreal carnivore, which would have appeared 40 million years ago. Some 10 million years ago, the race of today's cats would have diverged from the Pseudaelurus living in Europe and Asia since about twenty million years.
The cat which today lives in our homes would date back to 3,6 million years. And the beginning of its taming around - 130 000 years.
(All these dates always remain imprecise ).


The "social-emotional" link between the Man and the Cat intensifies towards - 7500. Very quickly considered as the " rescuer of harvests ", he continuously chased away all the fond of wheat and barley rodents.
So, the cat was very early appreciated and respected, as he brought prosperity and assurance of a good harvest because his efficient action for eradicating rats and other mice.
( Expansion of the cat worldwide - wikipedia source - click to enlarge). 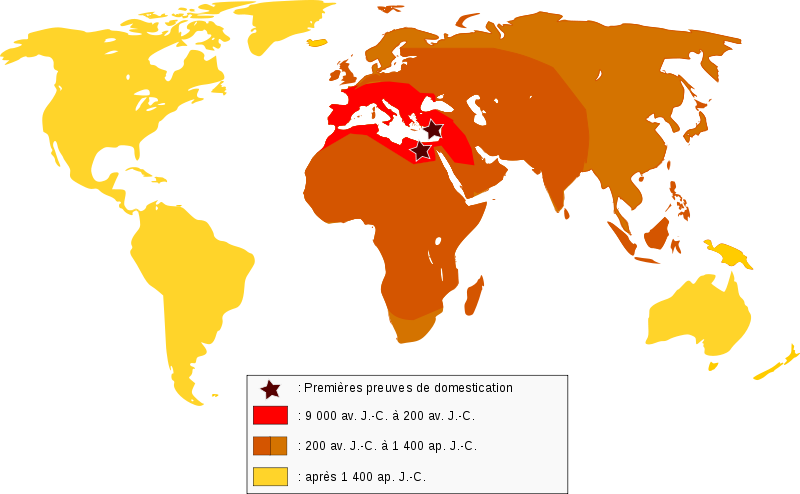 The cat taming especially began in Antique Egypt.
For the Ancient Egyptians, he was a protector not only for the harvests but also and consequently against the serious illnesses as the plague that the rodents transport.
Furthermore, the cat was always effective also in his hunting of snakes.

And so little by little, the cat was protected and worshipped.
There already were in the Egyptian pantheon lions and lionesses, but their ferocity naturally prevented any close relation.
The cat, with his small size, his efficiency and beauty, quickly took the place of the big feline.

The cat's consecration was the first representation of the Goddess Bastet, with a head of cat. Because the love for cats spread in the whole country and beyond.

But however it is important to notice that the cat already played a role as " slayer of evil " fighting Apopis, when Seth gave him way ! 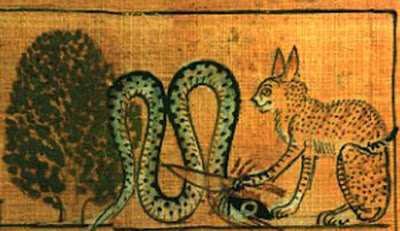 What was totally coherent with his instinct of chasing reptiles.
(Above cat mastering or killing the snake Apopis - source wikipedia).

Let's develop, if you want, the so particular aspects of the cat in Antique Egypt.

II - THE DEIFIED CAT: BASTET
The goddess Bastet always symbolized the warmth, the life, the enjoyment, the fertility and the beauty. In her "human" representation, she was strength and solar light.
In her mid-human and mid-animal representation, she becomes more lunar, more "occult".
From there will come the attribution to the cat of psychic powers and extra-sensory capacities.
Below Bastet in cat, the sistrum and menat necklace in hand.

The sistrum is a small Egyptian stick made with papyrus at the end of which is hung a ball of fire. It represents the victory, the power and the luck.

The Menat necklace and its counterweight is associated with Hathor.
Bastet was very quickly likened to Hathor, for her benevolent, generous and especially maternal aspect. The Egyptians considered her as defender of homes and children. 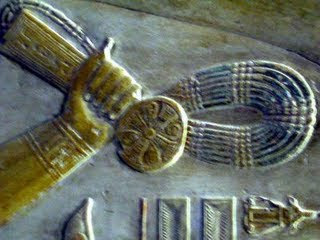 This necklace assures the immortality for the deceased who have the luck to touch it and the revival of any situation or of any being.
It could, naturally be also worn around the neck. It was used for the uttered sound when its pearls were shaken, what had the power to chase away evil spirits.

Then she helped the fertility of men and of animals, watched out for the souls of dead, brought down the disease.

Protector of homes, Bastet is far from only being the inveterate enticer which is described in some books.
One often showed her with her kittens, obvious images of children on whom the parents asked for her blessing.

In her animal shape, the representation of Bastet is very famous.

The head of Bastet, her real name Bast, was often the one of the Mau cat, called Egyptian Maubecause native of the country. In fact, Egypt is the homeland of cat, the cat with green eyes. 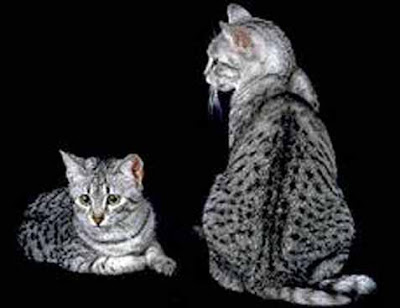 Her spotted coat is very particular because the only one to possess such a natural marking. Her pelage with silver reflections (above) or smoke black (below), is quite suiting and reminds how much the felines are elegant purebred. 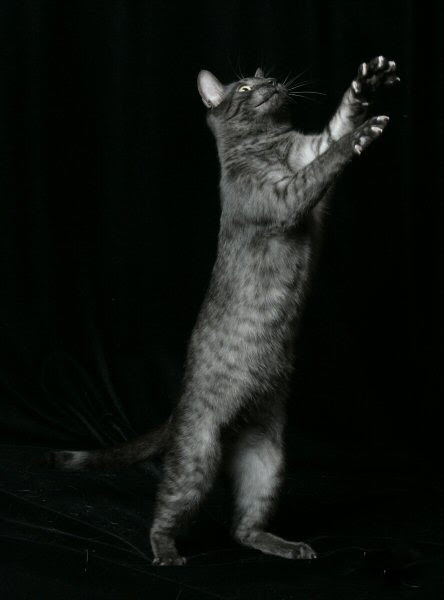 Thus the Mau entered with great pomp in the Egyptian temples and was mummified, what was a great honor which was only reserved to Apis, the sacred bull and to the cow, Hathor.
One found in some cat necropolises more than 300 000 mummies. The one who killed a cat would incur the death penalty.
Besides, the temples possessed their own " race of cat ", guardians-cats of temples, important function passed on by heredity. 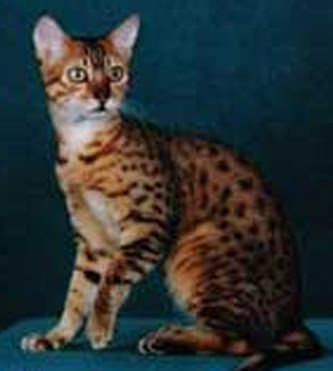 In the palaces and rich houses, the cat was brought up in abundance, cherished and really overprotected. Even in famine period, the cats were protected. And the Egyptians were too much afraid of the lightnings of Gods for only thinking to kill one and feed on it.
When one of the cats of the house died, 70 days of mourning took place, during all the time of his mummification.

The cat decorated furniture, dishes and even the seats for women, in particular as protection against infertility and venereal diseases.
Frescoes depicted him acting or protector in the fight.
( Below on the left between the two birds, at the feet of the fighter). 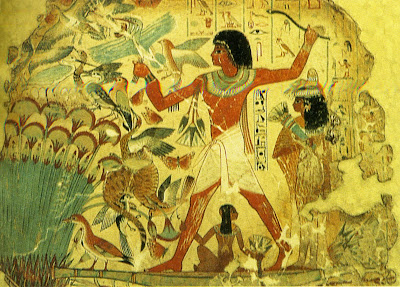 This can make you smiling but for the Egyptians, the Gods were at the same time flesh and spirit. Their spirit could penetrate into anything and live into every being. So Bastet and consequently her father Râ, "lived" in the cats.
( It is not sure that Bastet was the direct daughter of Râ if she is in spirit, and if it's true that Râ is Marduk, the Egyptian genealogy is full of errors, I shall return on this point in a next message).

The worship of Bastet especially spread in the whole country at the time of the Middle Kingdom of Egypt.
Her city was Bubastis where her famous feast gathered tens of thousand believers and pilgrims.
Her temple of which nothing today remains was depicted as smaller than the average, but so beautiful. Surrounded by a channel, it seemed to isolate the temple such as an island.
So the cats, in particular the Mau (there were three races in ancient Egypt) were baptized " Pharaonic cats ". The cat of Egypt is the direct ancestor of our domestic cats.

III - BASTET, CAT AND OCCULTISM
The cat, linked in Egypt with the power of Gods in particular that of Bastet who lived in cat's soul, became "satanic" in the Middle Age in particular under the Inquisition.
The impaled on spikes cats were burned in the same way as the so-called witches, on pyres.
(I am always bewildered, though nevertheless been henceforth accustomed, in front of such a stupidity from the Catholics of these times, and from many followers still today. It is totally absurd to sentence to death an animal just because he is black or hunts at night ! How Satan can be involved there ? As I often say it: Satan, as a devil with horns, has never existed. But the repeated cruelty of a religion " of love ", yes. And the historic facts live forever, eternal witnesses of all the possible horrors.)

René Lachaud in L'Egypte ésotérique des Pharaons aux Editions Trédaniel, gives us the real reason for the worship of cats:

"His so supple vertebral column is an alive Djed where runs out without mishap the vital fluid.
That's why the cat is bearer of an intense energetic power. René Lachaud besides calls him " the solar-lunar ".
Solar ?
Because his eyes are round like the solar disk.
And because he is associated to Bastet, radiant heat and to her "dark" counterpart, Sekhmet,voracious fire, when the tender and benevolent cat moves in merciless lioness?
Some people say that her crystalline mustaches are one of the hieroglyphs of the secret Fire.

Lunar ?
Do not forget that the cat sees in the dark. He can venture into "darkness" and cross with suppleness the " traps of darkness ", exactly as Thot/Mercury, the psychopomp (and lunar), god who comes down in the Duat and comes out of there always more brilliant.
For the Alchemists, the cat has the power to combat the " dragons ", the "snakes" that all of us we carry in ourselves. He "comes down" in the caves of our unconsciousness. So, in his deep symbolism, the cat is a fearsome Dissolvent, in the alchemic meaning of the term. He absorbs, fights, kills, the rough gravities which slow us down and reduce us to nothingness, in order to facilitate the revival. 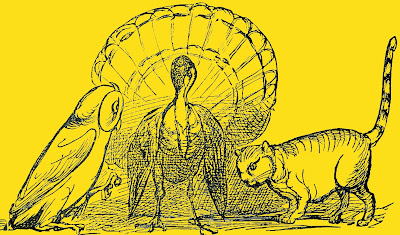 Above an ancient representation of the three animals directly connected to the occult knowledge: the owl, the peacock, the cat.

But it is true that his " Divine Mother ", Bast also possesses many magic powers.
Better, one tells that she has all the divine powers in herself.
The head is the one of Râ, her nose that of Thot, her mouth that of Atoum, her heart that of Ptah(notice the constant association of Ptah and the heart), her stomach that of Osiris, her hips those of Horus...
So, invoking Bast in magic implies the liberation of all poisons infesting us, whatever they are; physiological, moral, psychological or even imaginary.
She also cures the mental diseases.
But, because her heart is " that of Ptah ", she acts with kindness, knowledge and intuition.

In Karnak, the goddess remains seated in front of a big jar with ointment which is sealed and which would contain many divine secrets. (The root of her name, BST, is symbolized in hieroglyphs by a closed jar with ointment).
The ointment: Bastet has the knowledge of the sacred plants, and, as it is murmured here and there, the knowledge of the one who grants youth and doubtless, immortality... 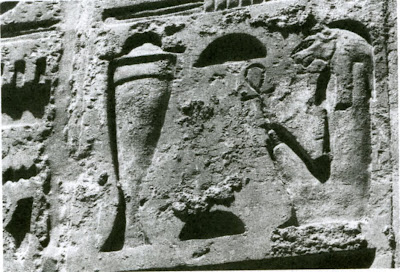 Certainly, Bastet seduces. Naturally, she is the creative accomplishment, the kundalini which rises along the vertebral column (think of the cat, his so supple column and the djed).
Besides her power will lead the priests of temples to sometimes assimilate her totally to Isis and more to Hathor.

The feast of Bubastis also celebrated the sexuality, and in its physical and "divine" manifestation.
The sexual act, when besides, is added the feeling of heart, is the best " celestial staircase " towards the Gods!

Bastet protects, heals, she is the fulfilled femininity, serene, confident in her charm, she likes music, arts, beauty and dance.
But...
" Bastet today, Sekhmet tomorrow! " were accustomed to say the Ancient Egyptians.
Certainly, if Bastet protects her faithful, it's makes sense that she changes into terrible lioness in order to bring down the enemies of those of which she cares about.

Let's discover, if you want, the symbolism of Sekhmet.