ENKI and the LOST BOOK

At the beginning was the devastation... 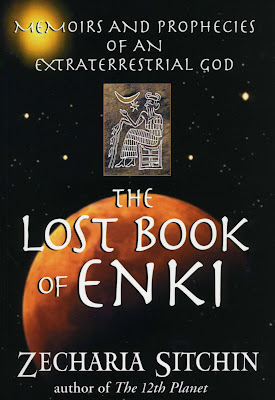 This is a brief summary of introduction to the first tablet.
An exhaustive chronology of the Lost Book will be drafted at the appropriate moment.


The first Sumerian tablet dictated by Enki to his scribes and translated by Z. Sitchin in “ The Lost Book of Enki ” (ed. Bear and Co), begins on a total devastation and the terrible sorrow of Enki.
(Even if certain aspects seem to you little developed, continue. The explanations will come on time. Enki clarifies the history in this way, I also make. I shall bring you nevertheless some clarifications in italics).

Such a disaster has just happened on Mankind that the Gods themselves in their cities are powerless.
From East to West, the earth is ravaged by the destructive wind, by what Enki names the Big Calimity.
(In Sumer, Enki was nicknamed, " the Wise ", " God of Wisdom ". We shall see throughout the history that he really deserved this nickname).

Ninurta, son of Enlil and Nergal, son of Enki had activated this disaster by releasing " the poisoned weapons in the big plain ". In front of the terrible damages, sons and Gods are devastated and cry.
They did not think that the " devil wind " (radioactive cloud) would reach Sumer and would “knock” to their holy cities.
In front of such a cataclysm, the Gods, powerless, run away cities and temples, as their people.

Enki explains to us that the toxic cloud approaches his sacred city, Eridu and that he cannot do anything to stop it. Then he orders his people to join the “dry steppes”, and did the same accompanied with his wife, Ninki.
Idem, he says, for his half brother Enlil also powerless in front of the cataclysm on his city of Nippur, place of "Bond Heaven-Earth" (link, bridge between Sky and Earth).

Do not forget: THE GODS CANNOT FIGHT DESTINY WHEN IT MANIFESTS ITSELF. THEY UNDERGO IT AS US. ON THE OTHER HAND, THEY CAN ACT BEFORE BECAUSE THEY HAVE KNOWLEDGE OF THE FUTURE.

There, Enki dictates to his scribe, the following sentence:
" The Evil Wind against Nippur was onrushing. In his celestial boat, Enlil and his spouse hurriedly took off ".
It is the first allusion to a spaceship in the first tablet. More than 7000 years ago, these Gods flew in the air with “celestial boats”.
(In fact there is much longer than that, the known chronology must entirely be revised).

Never has happened a so big disaster on Earth since the flood and the attack against the creation of the human race.
Enki continues: the flood was the work of destiny.
It had a logical existence which took its source in the climatic difficulties of the period.
But the Evil Wind was fate. Because decreed by the Gods.
The Big Calamity was not due to the normal course of the destiny, but the result of the decision of the council of gods. This generated an abnormality of the logical course of the destiny with all the disastrous and unexpected consequences.
It was the first nuclear cataclysm known by the men in these times.
Remember that, for Enki wind (or winds) means the nuclear blast, something totally devastating.

Enki establishes a thorough difference between fate and destiny. This fundamental difference is studied in another message to avoid too many digressions.

Enki explains then why this "evil wind" was thrown by Ninurta and Nergal.
The weapons were thrown against Marduk, first born of Enki, known as Râ in Egypt because the vengeance was in their heart.
The son of Enlil, Ninurta, refused that Marduk takes the power. And promised to oppose him by weapons. Nergal, brother of Marduk supported Ninurta.

We can imagine what feels Enki in front of the conflict which opposes two of his sons :
Nergal and Marduk. It is coherent that he wants to solve the problem by the negotiation.
Moreover, he writes: " Day and night I raised my opposing voice ". He opposed to it "day and night". We thus imagine the sourness of the debates and their duration.
“Why so much opposition? asked Enki. Is it not now the era of Marduk that rises in the Heavens?”

It is necessary to understand that for the Nephilims, thus Enki and his family, each reigns in an order of succession, but during a definite period.
It makes sense because they are immortal. Otherwise, it would mean that the same god would reign ad vita eternam. So to be first-born or not would have no more sense. And it would generate, certainly, seizures of power.
According to Sitchin, it had already happened on their planet, Nibiru.
Ningishzidda, the other famous son of Enki, did not support the comments of his Father.
(Ningishzidda is a name difficult to remember. It will be easier to do so with his other name, Thot, the great Egyptian god who will become in America " the Plumed Snake " Quetzalcoatl, another complex name.)

But it was impossible to reason these. The sons of Enlil are furious.
“Marduk appropriates my temple in the north of the city”, protests Nannar (son of Enlil, first-born on Earth).
Ishkur, the youngest son of Enlil asked for Marduk being punished. “Marduk takes people away from me!”
Utu, son of Nannar, (grand-son of Enlil) is also against Marduk, saying that he wanted to take thePlace of Celestial Chariots.
Zecharia Sitchin explains to us that these beings come from elsewhere had settled "spaceports" for their spaceships, launching bases.
Nergal, son of Enki proposes the first one the use of the " olden Weapons of Terror ".

(When reading the first tablet, it is not surprising that afterwards Nergal was associated with the Hells and with the Darkness! He will become Hades / Pluto, God of Hells and of the subterranean worlds for the Greco-Roman.
Contrary to what is written on Wikipedia France and English, Nergal is absolutely not the son of Enlil and even less Shamash. Nergal is the son of Enki and brother of Marduk. Shamash is Utu, grandson of Enlil!)

Enki says his sorrow. Nergal wants to use weapons of mass destruction against his own brother. He opposes to this idea. But, Marduk will be chastised. With his son Nubu whom organized the human worship of Marduk.

Enki asks that humans are not injured. He insists saying that the innocents do not have to die with the culprits. Ninoursag agrees.
Sure, she has helped to create humankind.

Then appears : Anu.
We learn that Anu follows all the deliberation of the council " from his celestial residence " with great attention. Because it is him who decides the "Fate". Thus to bend or not the course of destiny.
Anu is the Father of Enki and Enlil. He reigns over their planet Nibiru, at that time.
And it is him who legitimizes the use of the Weapons of Terror.
Use the weapons once, he says. Destroy the place of the spatial rockets (Sitchin uses the term of "rocketship "). Save the people.
He agrees the request of Ninurta to be the "Cleaner", the "Burner" and Nergal the "Annihilator ".

The fact to live on another planet with 500 000 years of technological advance on mankind does not provide to Anu any wisdom nor compassion. The human beings, although "primitive" by comparison, would have hesitated at least a little, before launching a nuclear attack on an entire region. How have they not realized that the nuclear blast will spread necessarily? How do they think to "save the people?" They believed that they could contain them without any doubt.

Do not forget: originally the Nephilims from Enli clan are hostile to the human race.
During the Great Deluge, it's Enki alone who saved us. The others wanted our destruction under the instigation of Anu.
The defender behavior of Enki towards the human beings, often against the decision of Enlil or Anu, would have a very expense cost for him. He will be "cursed" by a part of his own family. But WILL NEVER GIVE IN.
We can say that he still pays the price today. Because, he was a "traitor" for the Annunakis.
Enki is a being of common sense, compassionate and prodigiously intelligent. Why to destroy a so beautiful creation, why?
Enki is in love with his creation, with the human being, with the Earth, for our biggest salvation and it must be recognized for his great misfortune, in any case, until recently.

Back to the tablet :

Enki confronts Nergal. He says: " Are the Prior Times fated to repeat "? " Do the Ancient times have to repeat "? (Does a disaster again have to take place?)
Enki, bewildered, predicts that this will end in ashes. Both sons, his own and that of Enlil, "full of joy" rushed to seize weapons.
The other gods returned to their cities.

Then Enki gives us some information about the chronology.
At first, he says, there was the beginning, then the "Prior Times" or still, literally " First epoch, previous times, previous " then the "Olden Times" or " Formerly Time ", the oldest times.

Formerly, the gods came on Earth and created Mankind.
In the Prior Times, the gods lived on their planet, Nibiru.
Enki presents at length his planet of origin. I summarize here in some words, I shall make a specific message about Nibiru.
A planet with red radiances of which the revolution around the sun lasted for a long time. But the climatic problems seem difficult: when Nibiru approaches too much the sun, the heat becomes unbearable, the atmosphere being unbearable, the volcanic eruptions are frequent.

Then Enki explains that after eons, they succeeded in becoming immortal. They thus became more and more numerous on the planet, because nobody died!
The inhabitants scattered on Nibiru in search of a territory. So were born many rivalries, fights which brought to the split of the people of Nibiru in two "nations" which were in confrontation.
That North against that South.
A terrible war followed. Deaths, destruction and sadness reigned over the whole planet.
Then the peace returned.
The unity of the planet was found by settling on the throne a king who would be in charge of the business of both nations. A unifying king.
So, when the king would be from the North, his wife would be from the South. When he would come from South, his wife would be from the North.
The first-born of the couple would be the legitimate heir of the throne.