The THOUGHT
of
ANCIENT EGYPT 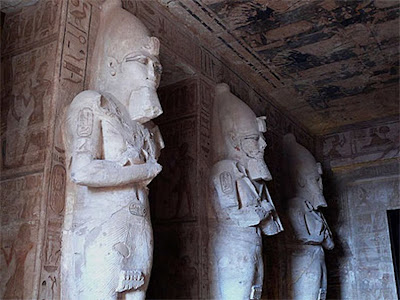 And however, because it is advisable for the Sages to know in advance all the things to come,
there is one that you have to know.
A time will come when it will seem that the Egyptians vainly honored their gods,
in the devotion of their heart, by a diligent worship: all their holy worship will fail, ineffective, will be deprived of its fruit.
The gods will leave the earth, will get back to heavens.
They will abandon Egypt.
This country which was formerly the place of residence of the holy liturgies, now widow of her gods, will not enjoy any more their presence.

Foreigners will occupy this country, this land, and not only we shall have no more concern of the observances, but still more, it will be ordered by claimed laws, at the risk of punishments, to abstain from any religious practice, from any act of devotion to the gods.
Then, this very holy country,
homeland of sanctuaries and naos, will be covered by graves and deaths.

Ô Egypte, Egypt, it will remain of your rites only fables and your children, later,
will not believe in it anymore.
Nothing will survive except engraved signs on stones which tell your pious exploits.
A barbaric neighbour will establish in Egypt. Because the divinity goes back to heaven;
all the abandoned men will die and, without gods and without believers,
Egypt will become a desert.

It is to you that I address and announce things to come, very holy Nile:
streams of blood will inflate you up to the banks and there will be much more dead than alive;
as for the one who will have survived, it will be by his language that we shall recognize him for Egyptian. In his way of behaving, he will seem a man from another race.


The darkness will be preferred to the light, the mystic will be considered as insane,
the fanatic will be supposed to be a hero, the worst criminal to be a good man.
One will laugh about the soul and all the beliefs which are connected with her.
Much more, one will see only vanity there. It will be a crime in the eyes of the law to be devoted to the pure religion of the spirit. One will create a new law. Nothing holy, nothing pious worthy of the heavens and the gods who live there, will be listened any more,
nor will find faith in the souls.

When all these things will have been accomplished,
ô Asclépios,
then the Lord will annihilate all the malice
and he brought back the world to its first beauty ".

Inspired by her mother Sumer, Ancient Egypt, proposed 10 000 years ago, a philosophy of which the foundations were pre-scientific.
Indeed for the Egyptians of the old days, the man is the outcome of the Nature and its effects.
Man and Nature constitute a buckle.
Because of the Man, one understands, one touches the origins of the Creation and thus the Great Primordial Gods, the Trinity Ptah/Râ/Thot.

Here, the Creation is a vast reservoir of "locked" energy in a gigantic Space-Time into which spreads Egypt and her Great Mysteries.
The Time, explain to us the Ancients, is the consequential phenomenon of the Creation.
No Creation, no Time. A fortiori no Linear Time.
The linear Time is an unlimited succession of present moments, instants which stick, in the order of manifestation, on the course of time.
Exactly like a necklace of pearls. Every pearl embodies the present moment.

But this Linear Time is not monotonous. Because every moment is different, somehow. In its conception, in the emotion, in the feeling, the peace or the tension, the opening or the closure.
The Creation is thus, exactly like the Gods, including the Cosmic God, always in the making of herself, she is is continuous.
The seed becomes foetus who becomes a child who becomes an adult who becomes aged who dies who returns to one's soul state who lives "somewhere else" who embodies oneself here or there elsewhere....

In the profound symbolism of Antique Egypt, the Crossing has a big importance.
. The crosier and the beam cross each other.
(below Osiris) 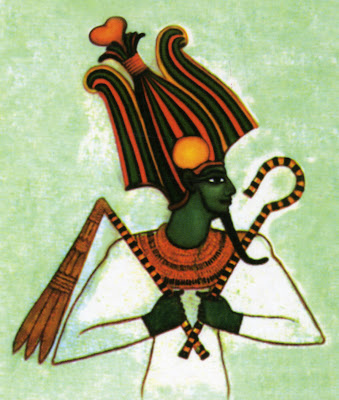 . The arms cross themselves on the chest to protect the heart chakra, Big Temple of God Ea/Enki/Ptah who lives in all of us, because created by Him in his image, then engendered by his own seed.
Because indeed, in Ancient Egypt, the Heart was considered as the essential organ, motor of the Life and the Thought.

These body movements, so powerfully magic in Egypt, have for foundation the Original Crossing.
The Crossing is the meeting in its junction point of any things: events, understandings, actions...
Remind you what we learnt about the Psychic Powers of the Nephilims.

Everything always crosses itself, in its centre.
In order that the Creation embodies herself, the event has to occur, in order that the light is made, the crossing, the "meeting" is inevitable.
. To engender the Creation, Ptah uses the big 4 Elements.
. A child is born from the "crossing" of the ovule and the spermatozoon.
. The real Understanding proceeds from the connection between the logical Intelligence and the Consciousness One. From the harmonious crossing and the well-developed right and left Brain, the Infinity, the original lemniscate. (Powers of the Nephilims -3-).
.When Life and Death cross themselves, springs the Immortality.


The Creation, the child, the understanding, the Immortality, all these ensue from the reaction to this incredible crossing.
In fact, nothing exists which was not "thwarted". Or more exactly, nothing exists which did not undergo a resistance.
Because we "resist" to the darkness, we switch on the light. What awareness would we have of the one or the other one if this duality did not exist?
If the resistance had not shown itself?
So, any negation engenders the assertion which ensues from it.
And every assertion attracts its opposite, its negation.
The Truth would be at the crossing of "yes" and "no".
A " Middle Path " prematurely?
Think of the Kundalini (see messages Powers of the Nephilims)
To the famous junction point, when Ida and Pingala cross themselves in the vacuole of the chakras.
Every crossing engenders a stronger rise of energy and the opening of the traversed chakra in its center.
At every crossing, the veil of the illusion dissolves. The Truth shows itself.

So, for the moment, the Human Consciousness emerges from the duality, from the comparison, from the debate, from the constructive opposition, from the resistance.
A resistance which is not a fight, but on the contrary reflection, desire to know something else, the open-mindedness, audaciousness.
An union science-occultism.
Consciousness. With Science. And wisdom.

The Universe is thus the perfect symbiosis of the Egyptian thought. All the religions will be inspired by it, including the monotheist ones, what irony!

Let's see it.
The One self-engenders. He is the Unique whose name cannot be pronounced in full. He is the world and observes himself.
In order to create, the One needs all what we have "just spoken" about, the famous "resistance": the Water and the Fire, the Feminine and the Masculine, the Yin and the Yang, the Yoni and the Lingam.
From the One proceed the Two who fecundates the manifested One. The manifested One is
the " Three in One ".
So, the Original Unity, Androgyne, splits in Two: Yin and Yang at the same time opposite and complementary, who by uniting fertilize our manifested Universe, what we see and listen and smell...
The Three is the base of any creation. This principle, very previous to Jesus and other gospels asserts that the Trinity is the active Principle of any fertilization.
It is then that the Trinity becomes four.
The triangle becomes square.

The Body, the Soul and the Spirit, divine Trinity which engenders the Human being, the fourth major principle.
That's why the 4 is the mother-figure of our planet with, in another way, the 7.
The Father, the Mother, the coupling give the child.
The page, the pen or the computer, the weft engender the book.
The reading, the understanding, the contact allow the teaching.
The ingredients, working the dough, the cooking offer a good meal.
And so on, to infinity.

That's why the Egyptians represented their Gods in different ways, and mixed divine, animal and human reigns. They sometimes used, indeed, the image of nasty animals like the scorpion(Selket or Selkis),
(below Louvre Museum) 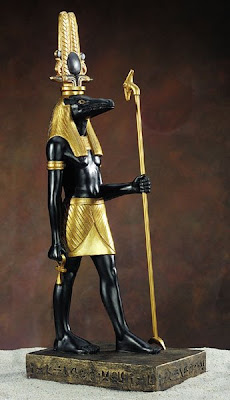 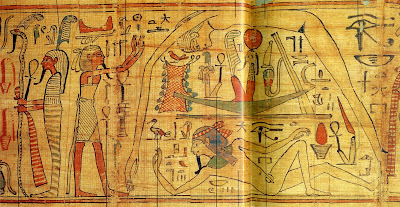 The Egyptian sees the positive in every being, because he understood that every animal is bearer, like any creation, of the three principles which embodie themselves in four.

Let's see the case of the so symbolic Snake, in Egypt.
(Below: the cobra bearer of the solar disk - source - Egypt - Lange - Flammarion) 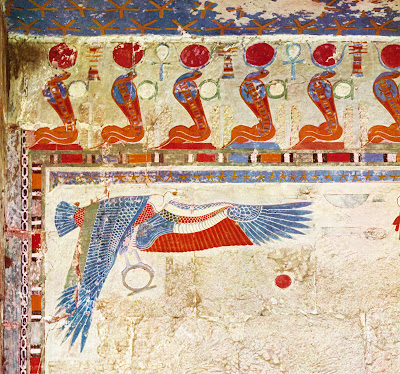 He spits and kills with his poison, if he bites. But the consequences of the venom are double. It kills or saves, once transformed into vaccine.
By his sloughing, he shows us what we have to do : to transform us, "make new skin", to evolve, to progress.
He is Three in One: Life / Death / Transformation (base of any alchemy, it doesn't much matter here the order in which they take place) and.... a new start, manifested in four.

Look
. The friction is equivalent to the obstacle.
The snake rubs itself until the old skin leaves him. As long as he did not moult, nothing more is possible for him.
. The sliding is spiritual movement.
Once sloughed, the snake, quite cheerful, starts again with renewed vigor towards new experiences.
Yes, the Egyptian knew.
That's why the power of the snake symbolism, I insist.
He slides. He does not fly, does not run, he slips and joins the river which winds, the water which penetrates everywhere, because it flows, fluid and " supple " and always finds its way.
(A long message, very important, will come soon about the Water.)

Thus:
. Every right action is fluid.
It "slides" on the path of life.
You are like the snake, you moulted, ready for new adventures.
. Every premature or inadequate action "rubs itself" to (against) the Life.
When the obstacles appear, when the desire "rubs itself" to the persons, the situations, the projects, it indicates an error of choice or way. The slough is not finished. It is in progress. Maybe it even did not yet begin !
The Egyptians, in these cases would run towards their gods. And asked their help.

And so thousands of years ago, because the Gods Nephilims walked among the Men, the Human beings had perfectly integrated the great Creator Principles and all the rules proceeding from them.

Consequently, we shall develop the occult meaning of the Great Sacred Animals in Egypt and study their impact on the other civilizations.
( Click the image below to enlarge it. Source L'Egypte de Lange et Hirmer ) 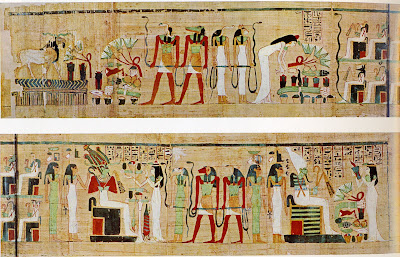