I - THE EVOLUTION OF MANKIND

The scholars since Darwin thought that the man was the most accomplished and the most recent link in a long evolution which took billions of years since the most primary forms of life until him.
Nevertheless, these studies never answered the usual questions that the human being asks himself since the dawn of ages.
Whom I am.
From where do I come.
Where I go.
What I am doing on Earth.
What is the purpose of the whole creation.
The mystery of life remained fathomless.
Crestfallen, the feeling of abandonment in the heart, the man then invented God to give a sense in his miserable existence.

Then, these same scholars, dissatisfied by their own conclusions, brought their understanding of the history of the evolution into question and began to ask themselves the right questions.
And if the life existed somewhere else?
And if, by some still unexplained sowing, it had "fertilized" the Blue Planet ?

But the place of the man in the chain of the evolution complicates things.
Indeed, according to the archaeological discoveries, the pieces of skulls, the fragments of jaws, the man seems to have appeared in Asia, 500 000 years ago.
At the most the researchers discovered bones and thus re-dated their chronology, at the most thedevelopment of the evolution seemed much slower than they have supposed at the beginning.

The progress realized by the men in their everyday life was almost null. Sharp stones for example, their daily tools, found during the searches remained identical for 2 million years!
Below, two sharp stones.
To the left, that of the Australopithecuses, to the right that of the man of the Néandertal, 2 million years separate them, the difference is insignificant. And its use remains identical, no innovation, no inventiveness!
(source 12e planet - p.19- Z. Sitchin - Editions L. Courteau). 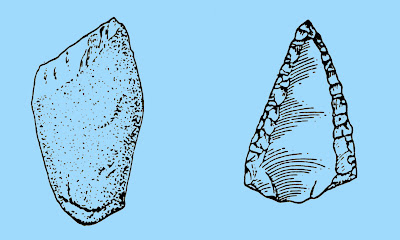 Then, suddenly, 35 000 years ago appears a new race of men, the superior homo sapiens, called also the homo sapiens sapiens which literal translation is "the man twice thinking".
As coming from nowhere, he swept away the Neandertalian from the surface of the Earth. 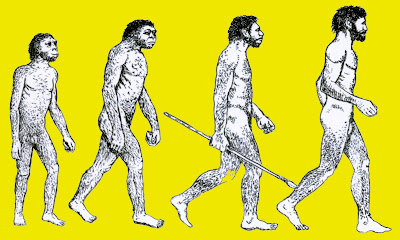 These "modern" men look like us that dressed as us today, they would pass unnoticed, asserts Sitchin.
They are amazing these sapiens: they move quickly, they crosses the earth, they paint incredible frescoes on the walls of their caves, they build their houses, and protect themselves from bad weather.
"Sophisticated" tools abound, and a primitive pattern of religion, centred around the Moon and a " Goddess Mother " extends.
Furthermore, they bury their dead, which is the first mark of civilization.

The experts are perplexed.
How is it possible?
Then......would the life have been "imported"on Earth?
But how?

Would this homo sapiens have been created by Gods "fallen" on Earth, as immemorial sources testify and that the Old Testament has retrieved for its own benefit ?

The things are clear: according to our researches and our traditional understanding, no civilization could have yet appear on Earth. We should still be in prehistory.

It is henceforth recognized that the origin of the civilization of the man took root in the Near East.
Exactly, current Iraq. A civilization which extended to the current Lebanon, Israel and Syria. 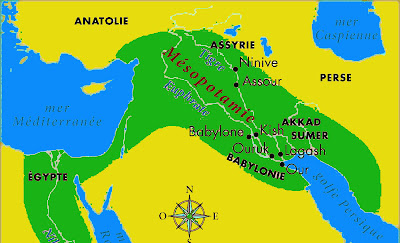 The caves that have been discovered by the archeologists indicate something amazing:

a modern man lived there
at the time called "prehistoric."
Other curious phenomenon
The more archaeologists sought and found, the more they realized that the civilization had suddenly stopped. And even it has been seriously declined.
Indeed, from - 27 000 BC to - 11 000 BC, the area was deserted. At first, this was attributed to the climate.But the cause remains incertain and always on debate.
Then, they discovered that suddenly around - 11 000 BC, the "thinking man" appeared again, still in the Near East, still in "Mesopotamia", offering to the amazed eyes of archaeologists, a cultural level mysteriously superior to the previous one, while there had been, and beyond any doubt a "rupture in the chain of evolution."

This man became a farmer, he cultivated wheat and barley, and millet and rye! Still better, he extracted from flax fibers and edible oil also! He planted fruit trees and vines!
Unbelievable!

Even in the Bible, after the flood, Noe the survivor (Ziusudra, son of Enki with a human woman) plants vineyards! And even gets drunk! While his arch (a submarine) remained failed on the mountain Ararat ( current Turkey).
Scholars agree: the vineyard was born in the mountains of North Mesopotamia.
Furthermore, the homo sapiens feeds himself with apples, pears, olives, figs, almonds, pistachio nuts, walnuts, which all these coming from the Near East.

The Eden (E.DIN) is Mesopotamia, between the Tiger and the Euphrates, in the famous " fertile crescent ".
The Eden is the paradise on Earth. The Gods in those times walked with us. They had for name Nephilims. They had for name Ea / Enki, Enlil, Marduk, Ningishzidda, Utu,...

Around - 9000 BC, the "Gods" teach the man the domestication of animals. Still better, they imported here. Dogs and sheep. Goats, lambs and pigs. Born flocks, pastures and barns. 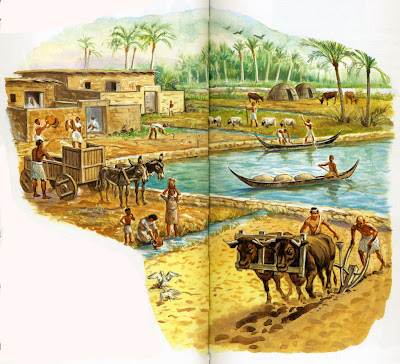 Then the gods show to build homes, resistant to weather, warm in winter, cooler in summer. It is the beginning of the stone houses.
They teach, we have seen, the respect of the dead and the decoration of the graves to protect their "journey".
On the stones are carved the faces of these amazing Gods so clearly involved in the human destiny.
They wear funny glasses and helmets on their head.
Around - 9000 BC, were found in northern Israel one of these sculptures.
(image The 12th Planet - Z. Sitchin - Ed Courteau - p.26) 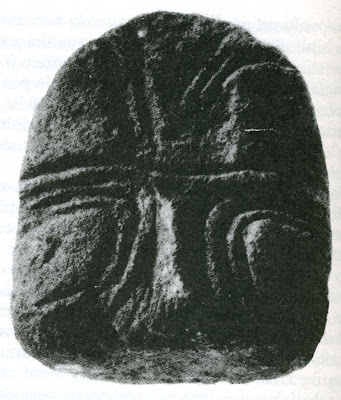 Around -7500 BC appears the pottery 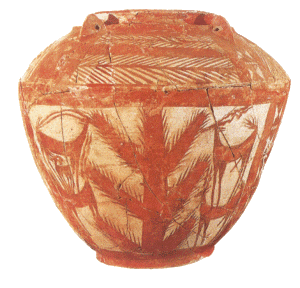 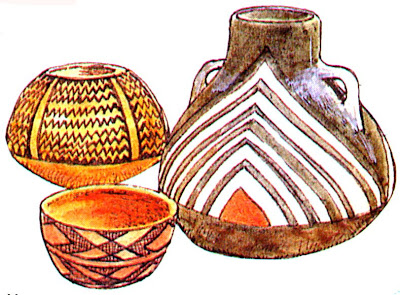 But this civilization was contained during a long period in the Near East. It will be necessary to wait 2000 years (!) to see it beginning to spread in Europe.

So in 3600 years of time, the man reaches a level of incredible and inexplicablecivilization,scientifically. Remember the space time : 3600 years. The duration of an orbit of Nibiru.
Then, after having until - 5000BC, realized potteries of an extraordinary quality, once more time, the civilization moves back.
We return little by little to the stony age. Height places of the pottery indstry are abandoned.
The man and his culture shows a clear decline.

Then, suddenly, a mysterious hand came again to extract the man from his collapse and once again brought him to a higher level of knowledge and civilization.
This hand was Enki and his Nephilims.
Indeed, the Near East was the witness of the inexplicable and unpredictable expansion of the greatest civilization ever imagined , where our roots are firmly entrenched: SUMER.

II - THE IMPORTANT DATES CONCERNING THE BIRTH OF MANKIND

- ?
Collision Nibiru/Tiamat : Earth is born. She has been during the collision "sown" by Nibiru.

- 2 000 000
appearance of the Australopithecus in Africa, called "advanced" meaning he looks like the futur sapiens

- 445 000
. Arrival of the Nephilims on Earth led by Ea, futur Enki
. The Gods build Eridu, Sation I on Earth, in south Mesopotamia.

- 400 000
. Enlil arrives on Earth, he establishes Nippur, as Control Centre for the Mission
. The interglacial era extends all over the globe.

- 360 000
Creation of Bad-Tibira : metallurgical center for smelting and refining

- 49 000
Begin the reign of Ziusudra, son of Enki with a human woman, king of Shouroupak, 7th city built by the Nephilims. Blessed by the Gods, including Enlil.
(Ziusudra = Utnapishtim for the Akkadians = Atra-Hasis for the Babylonian and Noe for the Bible).

- 11 000
Unexplained and " magic " return of the homo sapiens-sapiens "perfect", intelligent and of a superior level. The civilization develops at high speed thanks to the teachings of the Nephilims.