Emblem of the Divine Power 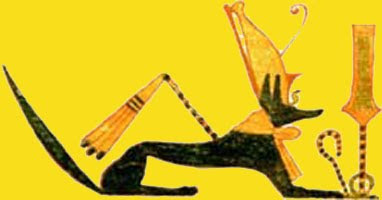 Sekhem is quite at the same time, a royal scepter and a magus stick. (Above, Anubis holds it in front of him).In Antique Egypt, Pharaoh, taught by the Gods, possessed the Occult and thus magic Knowledge.So it is not surprising that the Sekhem gathers these two functions.
The Sekhem that we see below in the center of the scene, is an instrument of power, strength, command but also of love for life.It binds Pharaoh to the Gods and naturally the Gods to Pharaoh. 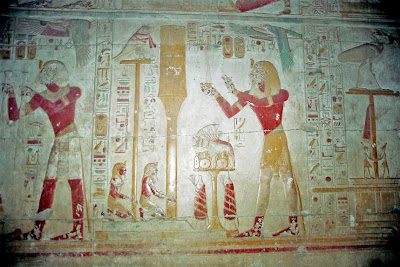 And so the stick Sekhem is also the synonymic word/hieroglyph of ardor and strength.
The root of the word SKH is in the name of the goddess lioness, Sekhmet, whose translation is, as you know it " the powerful ". 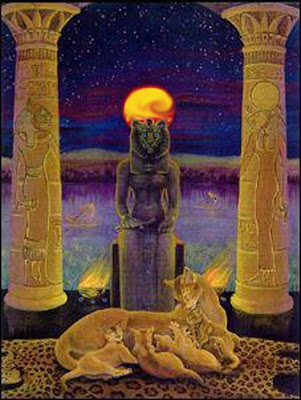 We have already seen, in the message dedicated to Sekhmet, that her immense energy is beneficial as devastating.Her legendary enthusiasm to defend the divine power sometimes causes to destroy more than necessary.
Nevertheless, Sekhmet is the goddess to invoke (gently and humbly) when we want to recover one's inner strength, one's personal power and the capacity to be respected.
That's why Sekhmet is associated with the cure. Her fire power burns the chronicities, the pains, the degenerations.She is, in a way, the embodiment of Sekhem.Or rather, the Sekhem owes its birth to her blazing presence.

And so one of the most significant word of power of the Heka, (the Egyptian magic), is " sekhem ".
It amplifies sounds and requests and to repeat it such a mantra opens quite particularly the 3rdchakra, Manipura, on which leans the 7th, Sahasrara and its thousand solar petals.

So, in Egyptian magic, to use Sekhem in repetition or by its symbol, means to use a virulent magic wand of vigour and stamina.
Determined, it will maintain the energy in itself as long as necessary to reach its purpose.
It will undo the ties, will open all the indispensable doors to the evolution of its magus or to the reduction of its enemies.
Because the Sekhem is intelligent.
It embodies the strength of cohesion of the alive Gods in the Man.

The Strength.
An essential term for our approach.
Moreover the ancient texts, as those of the Pyramids, speak about gods as about Sekhems.
Thus, strengths.Their symbolism, their postures, their movements, their colors, their crowns, everything is Sekhem. Because everything becomes power. Divine power.

Also in the Man, small god-to-be, settles down Sekhem.
It is the Sekhem-strength, skilfully distilled in our DNA by Ptah, then simply inherited from hissacred genes, which flows into our veins, every time we search, every time we study, every time we progress, every time we let the Life teaching us.
From this, in Memphis, his "wedding" with the Magnificent Sekhmet.(Below, Pharaoh gave the Sekhem to Amon-Min). 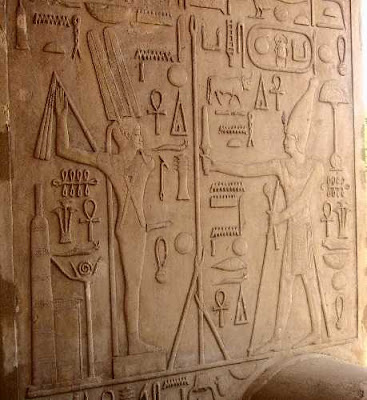 Sekhem chases away the bad spirits.
Not only the miasmas, the empty cockles or the enemies of this world or of elsewhere.
But indeed ours, our inner devils, our emotional ghosts, our family spectres.
Suddenly, Sekhem, great powerful and strong fire, spits the elixir of life, the red of the life, the blood.
So in Sekhem vibrates the life, carried by the red blood in us, by the red solar disk for the Gods.
Sekhem stick of strength, so often copied in the tales, the parables, the mysteries: stick of the wizard, the magic wand...
(Below Horus and Sekhem) 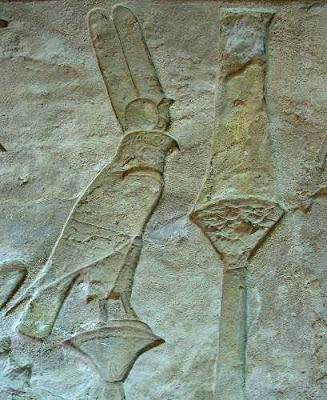 and of mastery, indispensable acquisition of the control of the wise and serene power, such as Enki / Ptah who always deeply ponders before every major decision.

So, the Gods donated us all what we need to move on our path of life.
And especially their love.
Glory to Ptah!
Glory to the Ancient Gods!
Sekhem in Ptah!
Sekhem in Sekhmet!