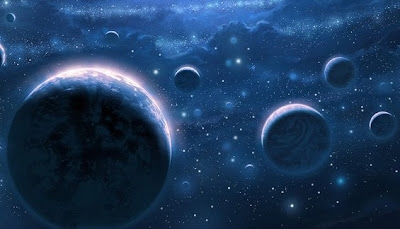 The planets, since a very long time, are considered as Gods. They are "celestial bodies", " planetary bodies ".

We point out this again in the books of Zecharia Sitchin where Nibiru, original planet of the Nephilims, is "merged" with God Marduk, first-born of Ea/Enki and Damkina.
The narrative of the epic of the Creation such as presented by the Babylonians in Enuma Elish, depicts Marduk as an alive God and, in the same time, as a planet. 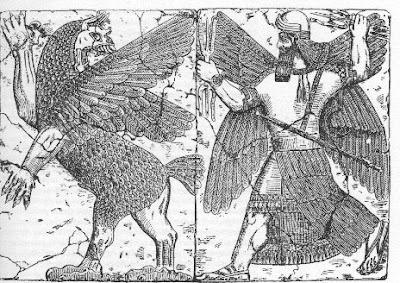 Marduk pursuing Tiamat
The astrology, the mythology, the anthropogenesis or history of races, among others, resume this " linguistic behaviour".
The planets of our solar system are called with the names of Greco-Roman divinities.
How is it possible? Have I been asked many times. How can a planet be a God?
To answer this, it is necessary to enter the occult world. The one of the great Mysteries.
And consequently to penetrate in it, open-minded, without any fear or prejudice.

I - INTRODUCTION TO THE PLANETARY BODIES BY THE ANALOGY

The solar system shelters our Earth and our Heavens.
The Heavens are the starry vault, which surrounds the planets, called by the Ancients, " hammered bracelet ", famous belt of asteroids, sacred rests of Tiamat, ancestral Mother," dragon female ", fought and brought down by God Marduk.
The superior part of Tiamat became Earth.
Everything that surrounds us is in our image.
Also, everything we are is reflected in our universe.
The Man /Microcosm is mirror of the Universe / Macrocosm, and the inescapable " As above - so below for the unity of a single thing" must be once more quoted.
And adding to “as above – so below”, “inside as outside”.


The "God of Gods", source of all things, is nothing more than the Life. The Life, which flows in the raw on everyone and everything, regardless of their different realities.
To understand this, think of the Sun, Apsu in the Babylonian Epic of Creation.
Look, how he is passive.
Marduk fights his wife Tiamat. He does not defend her.
The whole system is at war, he does not move.
Is that a surprise?
Sure, the Sun is the source of Life of our solar system. But a PASSIVE source.
Warming ALL the beings with his rays, whether black, yellow or white, women or men, gods or humans, young or old, thin or heavy, large or small, Muslims or Buddhists, humans, animals or plants, here or elsewhere ...
The Source, our Sun, who some call Logos, pours his Life (heat, joy, healing ...) throughout the whole system and thus our Earth, without limitation or judgment.

Then, each of us does what he wants with this energy. He can run to shelter under a parasol, or use it for heating his house or sunbathe up to the melanoma.
Here is one of the aspects of the free will of Man. What does he choose to do with the solar energy: a deadly bomb or non-polluting solar panels?
So, Apsû/Sun/Logos/Source/Helios… generates the chi or ki or prana, or….. sacred breath of life.

Apsû / Sun breathes. Our system lives and pulses at the rhythm of his breath.
The life arises from his exhale. The "death" from his inhale.
The day arises from his exhale. The night from his inhale.
The Hindus speak about the breath of Brahma.
When Brahma exhales, the Creation appears.
When Brahma inhales, the Creation turns back in the heart of his creator and " falls asleep ".
The "sleep" of Gods means the integration of their numerous experiences, exactly as for the Human beings: "let's sleep on it" (the sleep as a good adviser).
This specific breath of the Gods also leads to the sound or the song of the world, which avoids the planets, - among other examples, to collide and to destroy our galaxy.
That's why the planets turn around the sun in a clearly definite order and rhythm. Their orbit, decided by Marduk on the desires of Ea / Neptune, is their "destiny", in other words, their planetary run.
The Sun, thus, is the centre of the system, perfectly symbolized by the dot in the circle.

On the other hand, our solar system is made by four elements plus the fifth, the Ether.
The Man, as perfect mirror, shelters the same four elements:
+ the flesh is the Earth element
+ the blood, the Water element
+ the breath, the Air element
+ the temperature, the Fire element
Furthermore, his head evokes the roundness of a planet.
His eyes shine as the moon and the sun.
Look at the link with the Eyes of Horus, called " the eye of Horus ", of which one is Lunar and the other Solar….

Apparently, Enki knew exactly what he made, when he conceived the Man in his image, (think that his genes are forever in us), and I particularly think here of the " second birth " of Homo-Sapiens, the second wave of Humankind, the one to whom Ea / Enki, always generous and beneficial god, offered " the fire of Knowledge " and the capacity to reproduce. (at which price for him).
Look here again the link with the gift of Fire made by Prometheus to the Man. 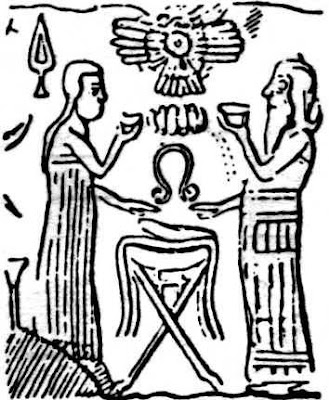 Enki helped by Ninursag create the human race ( Homo-sapiens sapiens ) Z. Sitchin
When the Creation appears, (exhale of Brahma or manvantara), it "comes down", it falls, because it densifies the divine thought. It materializes. It becomes Matter.
When it comes back in the heart of its creator, (inhale of Brahma or pralaya), it lightens, becomes again "Light" thus Pure Absolute Spirit.
Notice that the Light really appears in the divine heart, at the time of the divine Night, the Pralaya, when everything sleeps, and thus when everything is dark. And so the Light gleams only in the heart ofDarkness.
The Darkness symbolizing then the Great Silence, the Great Nothingness before the manifestation of the Creation. (And not the imps with grotesque horns made up by our “beloved” fanaticized catholics. The Darkness has NEVER been the Evil but indeed the undifferentiated creation, thus not yet manifested.)

Look at your physical body:
He also manifests this reality of " ascent and descent " of the Spirit of Life.
Who practises this day after day, second after second?
Your heart! And the brain also!
The brain gives order of manifestation (blood circulation) to the heart, which obeys him (with the rest of the body) by pumping all the necessary energy towards the body. Once reached up to the fingertips of hands and feet, the blood goes back up towards the heart, the brain and so on.
The heart gives without any expectation. Does “he” ask the legs or lungs for a wage to irrigate them relentlessly?
Or does “he” refuse to feed the stomach or the right kidney, because “he” doesn’t like them?
The Sun acts in the same way. Let’s go farther with the demonstration.
When the Brain ( the Father /Source) orders the Heart (the Son / Superior Consciousness) to feed its Creation (Shape / Human Being), then the Life animates.

Shape/Physical body/Ego = 1st, 2nd and 3rd chakras = Human Being / Divine child = the Manifestation = Experience of and in the Matter = personal power - creativity - self-awareness

Here are some examples among thousands which help to understand our relation to the universe.
As our physical body reflects and induces the universe in “him”, the planets also are the bodies of the gods.
Look exactly what this means.


II – THE PLANETARY BODIES AND THE GODS
Our physical body is the dense and tangible projection of our thought. Our body reflects what we think about ourselves.
He is also the temple of the soul, the vehicle of the Superior Consciousness which lives in us. This spark, this "image" of our creative God Enki, this receptacle of his divine genes lives and spreads in us.
That's why we have to love and take care of our physical body. He is the movable base of our soul.

The planets are the exteriorised bodies of the Gods. Exactly like for us, they manifest their thoughts about themselves.
Thus, the planets are their vehicle, their movable base, and their manifested, tangible or “embodied” body, in some way.
We can say that in a more “esoteric” way:
The planets are the material projection of the thought of the soul of the concerned god.

The God Mercury is the messenger of Gods. He is much more than that, but first of all, let’s see this aspect.
Because he is the messenger of Gods, his orbit is extremely rapid. Furthermore, he never goes far away from his solar Master. Only Mercury, the prompt, can " communicate the divine decrees ".
Do you imagine Saturn to be the messenger of Gods? With his slowness, his notion of time, 6 months of retrogradations in a year? Or still Neptune, which turns around the sun in 165 years?
The informations would arrive out-of-date, the system would have died in a “merry chaos” even before being built!

So the very active thought of Mercury made him appropriate for this "job" of communicator.
Is it not the characteristic of the sign of Gemini of which the master is Mercury? Always to chat, to teach, to communicate, to explain everything in detail?
But because Mercury is rapid, he can’t be profound. He remains superficial, shallow. He passes on the information and escapes. It makes sense !
But, Mercury is not only a messenger. He transcends the "a little bit crazy" side of the Gemini sign.
Mercury represents a pale reflect of Hermes Trismegistus, the Thrice-Great.
Who is naturally the Egyptian god Thot or Téhuti. Ningishzidda in Sumer.
Quetzalcoatl, the plumed serpent at the Aztecs.
Mercury becomes, then, at the same time, Great Psychopomp and Divine Teacher.
Below, Thot, the Great scribe of Gods. 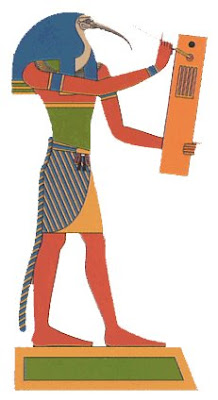 So the planet evokes by its density, its color, its speed of rotation or gravitation, the thought that the god has of himself. That on what he bases on.
The planet is only an aspect of him, its density, its tangible aspect for us, its " physical body ".
So, Nibiru would be the physical extension of Marduk, at least for the Babylonians, in the great epic of the creation.

I wish to deepen the meaning of one of the planets with you, NEPTUNE, which one associates to Ea / Enki.
To understand Enki as only a Sumerian Neptune is profoundly restricted and evokes some occult misunderstandings.
The god Ea is not the god of water meaning only seas and oceans.
Just below the following message Enki Ea and Nepture.