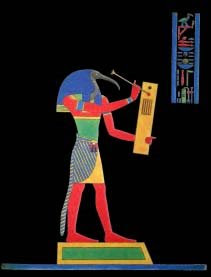 " The one who showed himself as the heart,
the one who showed himself as the tongue,
under the appearance of Atoum, he is Ptah the very ancient
who attributed the life to all the gods and to their geniuses,
by this heart from whom the god Horus arises,
by this tongue from whom the god Thot arises,
in Ptah ".
Hermann Junker, Die Götterlehre von Memphis, Berlin.
***
I - THE GOD THOT
Thot is the god Ningishzidda of Sumer, son of Enki, taught by him about the great secrets of the Life.
In particular he got involved in the genetic researches led by Enki to create the homo sapiens and offered his DNA to the man. He personally transmitted to Ninoursag / Ninmah what contained the ME and the acquired experiment from his father.
One can see today representations of Thot, the X chromosomes in a hand, the key of life, the Ankh in another or the caduceus. (Chapter I, paragraph 2)
Indeed, Thot is a healer, he restores the dead to the life, such as Horus, grandson of Marduk, who owes his rebirth to his great-uncle Thoth.

Thot, Djehouty or still Téhuti in Egyptian, is a particular god, not only by the immense Wisdom acquired, but also by his fidelity to himself.
This " God of the Tree of Life ", as nicknamed by the Sumerians, was never confused with any other.
He is and stays Thot, throughout the Egyptian civilization, god of wisdom, lunar god with multiple magic abilities, god of writing. Scribe, gods' messenger, Thot is also a god psychopomp. He comes down in these "Worlds of below" to assist Osiris during the weighing of souls (below). He notes and lists the judgments made by Osiris in the "world of the Dead". Osiris considers him as sacred and communicates everything to him. He often requires his assistance and his advices.
After that, Thot again goes out from "darkness", unhurt and without any problem. Such is the strength of the psychopomp. 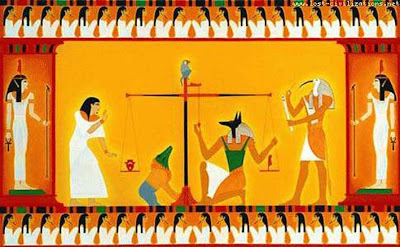 He also brings up to date all the divine decrees and he archives them in the Great Annals (Akashic records for the occultists).
And so Thot, the beautiful sacred Ibis, lives in the daytime and at night, with the alive people as with the dead, and successfully officiates in the sciences taught by his father.
He has, with Maât, the rare privilege to stand beside the god Râ/Marduk (his brother) on his boat.(Below, Thot under his form of monkey with Râ, carrier of the solar disk). 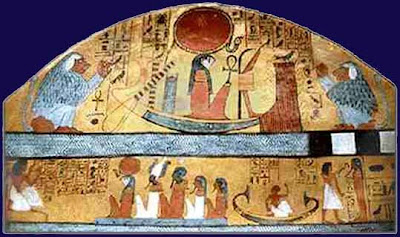 A "entire" God, in some way, to whom the figure 3 is often given.
Later, as it is said in the books, he will be, in Greece, Hermes Trismegistus - the “Thrice-Great” or still "Thrice-Powerful". But, he is that one already in Egypt!
"Djehouty pa aa, pa aa, pa aa ", "Thot Great Great Great".
He is below, in front of Seti 1st, in the temple of Abydos.

Thoth marries Seshat, "this one who writes", the Egyptian goddess of literature, of writing, of astronomy, of astrology, of architecture and of mathematics who perfectly supports Thot in his hard work. 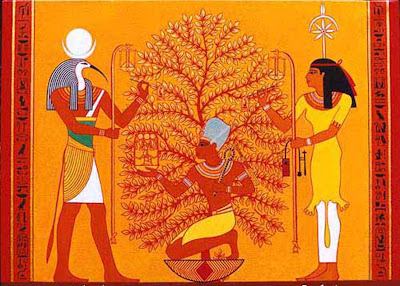 If, at once we understand the symbol of the disk and of the moon’s crescent worn by Thot, linked to his state of lunar god, to the magic, to the psychic powers, to the mastery of elements, the choice of theIbis can seem hermetic to some people.
The Ibis chosen by Thot is the big Egyptian ibis, with black head, which destroyed the reptiles and which, by his migration, has announced to the people of Egypt, the rise of the Nile.
The Ibis of these ancient times was bigger than the herons that we see today as its descendants. Even mummified, the height of Ibises found in the pyramids and graves is higher than that of our contemporary fowls. Do not confuse with the Bénu, divine Bâ. 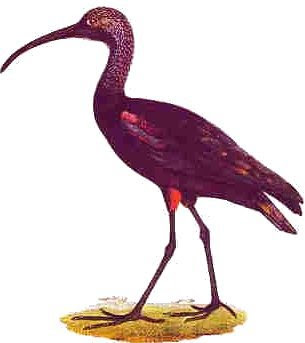 If above, he is represented "plum color" (purple), he really is black and white. But he has totally disappeared from Egypt, one finds him, smaller, in Iraq, some are born in captivity in Europe. 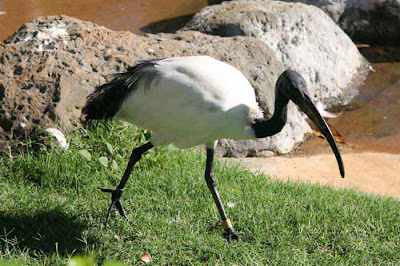 The colors of this bird are extraordinarily symbolic: the white for the day and the daylight, the blackfor the night and its so-called "darkness", from where nevertheless every morning appears the sun...
Moreover the Egyptians believed, that the very long beak of Thot / ibis, had the power to search the souls, to penetrate into the hearts, to dig up the big buried secrets. Once more time, the shape of his beak evokes the lunar crescent.

But Thot is not only " the big Ibis ". He is also the Cynocephalus, the baboon, this monkey of which the lengthened snout reminds that of the dog: Hedj Wer. 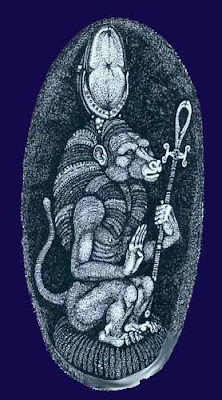 Hedj Wer, " the Great White " already appears, in the Texts of the Pyramids, identified to Thot. The monkey likes very much the sun in the morning, he opens the doors of Duat, Egyptian Worlds of Below where nevertheless the sun penetrates to pursue its daily and perpetual journey.
(Below on the boat of Râ, and with the eye of Horus, both joint aspects of Thoth: the Ibis and the Cynocephalus). 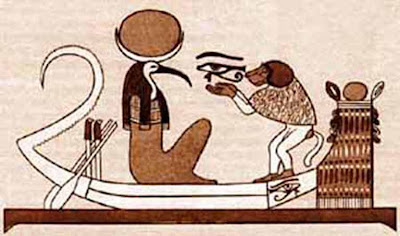 However, Hedj Wer although monkey, "do not copy" his master. He embodies him. That's why Hedj Wer is at the same time wise and talkative. Also brilliant, he inspires that one who tilted on the papyrus, writes, enlightens, initiates.
Often to do it, he is sitting up on the shoulder of the scribe. Moreover, the aforementioned baboon speaks. Is he not invested by Thot? He actually carries in him all his faculties and Ptah knows that they are numerous!
But take notice : if Hedj Wer is talkative, he is not a magpie without proper judgment. His language, that of the gods, is understood only by kings, big leaders and some skilfully hand-picked scholars, because the words of the sacred monkey are secret.
Secret words that Thot "become" Hermes Thrice-Great, will reveal, giving birth to the Hermetism.The Hermetism brings out the great secrets of the Egyptian knowledge, the power of its magic, the strength of its words, the power of its gestures, so particular. The Corpus Hermeticum was passed on by Hermes Trismegistus and not by Platon.
(But a Protestant theologian named Casaubon, who did not bear that the Corpus Hermeticum can teach such wisdom, succeeded to make admit, after struggling, that it was from " divine revelation " in the Christian meaning. Which means, in simple terms, that this man refused that a civilization with multiple gods can generate such a potential of intelligence, knowledge, and genius. So, we owe one more time to a religious, to have cut the Humanity of her most beautiful and more profound roots: Egypt and thus to have separated the hermetism from the country of Ptah).

Certainly, Thot is connected to the writing. He writes, he archives, he arbitrates, he compiles. His wife Seshat also evolves in the world of the writing, of the contact, of the knowledge.

So, by evidence, Thot is the master of Hieroglyphs.
And especially that one of the Word. He grants the eloquence.
He possesses the power of the words, the strength of the "Verb made Flesh".
Dignified son of Ptah, he becomes little by little "creative word". Certainly, he is the "tongue" of Ptah.
Not only the perfect mediator who arbitrates the endless conflicts, as that one which opposed Horus to Seth, but also, and alone, Demiurge.
" Tongue of Ptah ", " Heart of Râ ".
Certain texts of the Ptolemaic period confirm this idea.
Furthermore, in the Book of the Dead, the supplication of the deceased becomes that of Thot, who speaks through him:

" I am Thot, the excellent scribe, pure of hands,
master of purity, who chases away the evil,
the scribe of Maât, whose abomination is the evil,
from whom the rush (the calamus ) protects the master of the Universe, master of laws, " which makes the paper speak ",
which the words based both banks ".
(source : Le dieu Thot et la parole - Youri Volokhine -
Revue de l'histoire des religions - 2004 - volume 221 - 2)
(Calamus: sharp cut reed which is used for the writing)

Actually, let’s associate Thot, Grand Master of the Word, (and thus of the capacity to connect beings between them), with Mercury and his sign.
Mercury the messenger, the great communicator, governs the Gemini, sign of contact, which teaches, transmits, talks and communicates a lot and in details.

(Below, Thot Psychopomp, who, in the daytime and at night, writes, drafts, transmits, teaches, speaks). 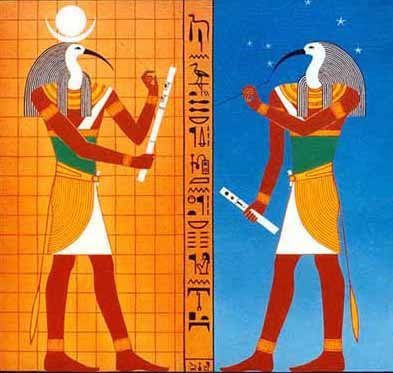 On a Theban grave, we find engraved the text of Nefersecherou:

" I am Thot, the scribe of Maât, the royal scribe, excellent at divine words,
from which the rushes protect the Master of all the universe,
the legislator, "who makes the paper talk".
(source : Le dieu Thot et la parole - Youri Volokhine -
Revue de l'histoire des religions - 2004 - volume 221 - 2)
Thot, as Enki, crossed the times. He is the guardian of the Humanity. Do you remember, when Thot / Ningishzidda went on Nibiru to present Adapa to his royal grandfather, what has Anu declared to him?
“As for you, Ningishzidda,
to Earth with Adapa you shall return
Of Civilized Mankind at your father's side
to become the teacher !"
(Lost Book of Enki - p. 179 - Z. Sitchin - Bear and Co)
This notion to guard, to protect and to teach is clearly the admitted purpose of Enki and his descendants, today more than ever.
It is interesting to notice that, from the beginnings of the homo sapiens a fortiori sapiens-sapiens, the gods, and the greater ones, are directly involved in the education of the Men, in the field and the transmission of the Knowledge: Enki himself, Ninmah, Marduk, Dumuzi, Ninourta…. and Thot, naturally!
Thot was quite particularly revered in Hermopolis Magna.
Naturally his believers, rapidly attributed to him the creations of Enki / Ptah: the time and the seasons, the constellations, the distribution of Heavens, the invention of writing ….and this with the blessing of his divine Father, always generous and benevolent with his children.
In Hermopolis, Thoth was named the "augustus" (who inspires respect, admiration) and represented the mental powers of Râ.
(Below the vestiges of the city of Hermopolis, Thot in monkey and always a necropolis in Hermopolis). 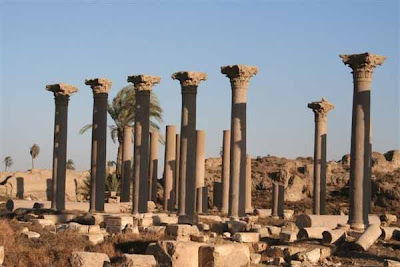 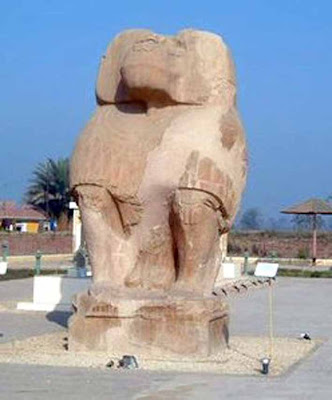 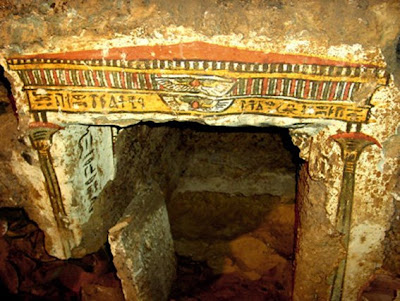 Then, he was revered in Memphis, sacred city of Ptah, where he was the tongue of Ptah, who created the world by the strength of his word.

In Hermopolis as in Memphis, the believers sang or recited the Hymn to Thot:
" Hail to thou, Moon, Thoth, Taurus in Hermopolis, Who lives in Herset, Who opens the castle of the gods, Who has knowledge of the secrets and maintains their expressions, Who knows how to distinguish a speech of the man, The judge of each,
God with a penetrating glance into the boat of million years, The fast messenger of the humanity,
Who knows the man according to his word, Who makes raise the bad action against his author, Who satisfies Râ, Who raises you towards the unique Lord and makes that he has knowledge of all the events.
When the earth whitens,
He calls in the sky,
He does not neglect the report of tomorrow ".