PTAH
GOD OF FIRE
FATHER OF THE UNIVERSAL
ALCHEMY


" Beautiful face, stable on his feet, South to his wall,
Ptah stands on the cubit-base of Maât,
because " he is the god of fire who lives with truth "
Texts of Sarcophaguses

I - REFLECTIONS ABOUT THE DIVINE
The totality of what we see, every day and every night, is only the manifestation of a first cause which remains invisible.
Nothing of what remains invisible can be defined.
And certainly not "God". The universal principle of life, the Unique, the One undifferentiated, at the origin of anything.
What we name "God" is only a list of qualities which define not at all the Essence of the Being, his self-hood, still less his unique forever hidden origin, but only his manifestation, such as we perceive it.

The Grand God Thot, son of Ptah, told about God.
(Naturally I summarize to a minimum his immense thought).


" There is A God and Gods ".
(In other words, to speak as in the Lost Book of Enki, the cosmic god, source of all that exists, and the Gods, the Nephilims/Anunnakis who are the oldest and the most powerful ones. But other gods exist, among whose are horrible tiny creatures, enemies of the human beings, who indeed would like to appropriate our Earth, so beautiful..)

Thot pursues and proposes us a divine "hierarchical organization". In italics, some personal explanations.

. The Unique, the Unengendered, the Without Name, because " the One who is, is nameless " (in other words, the One that we often call " The Source " or still the Ain of the Kabbala).

." The engendered by oneself " or self-engendered.
He is direct and spontaneous emanation of the Unique, father of himself.

Thot / Hermes will name him Kneph, Supreme Model, forever Immortal.
From Kneph emanate in his turn the " invisible powers of the hidden reasons ",original cause of anything.
(That's the first celestial manifestation which is " not any more pure perfection " but is still beyond any human understanding - contains at the same time the Yin and the Yang - approximately, Ain Soph and Ain Soph Aur in the Kabbalah - in this world is all what is not "earthly".)

. The Engendered Gods and the Cosmic Gods
All of them are Gods we "know", who are in the sacred books and the myths and legends as Brahman, for example or still, the Noun.
Indeed, here are all the primordial principles, the primordial gods, the gods of the solar systems.
(Those of Empyrean, ether and heaven, would say Iamblichus - Greek neo-Platonician philosopher - 242/325 - The Empyrean is the Celestial place where the gods live. From Greek " empyros " which is ignited " (always the fire))

There is, on the other hand, what one defines as


" Perfection of all what is made without any mistake and with a real art:
We name it PTAH. "
So, the Grand God Ptah, Ancient among the Ancients is an artisan:

Remember the Hymn to Ptah

Hail to Thee!
Before the primordial gods thou created
after came into existence as divine body,
who fashioned his body himself.
The sky had not yet come into existence,
the earth had not yet come into existence,
the stream had not sprung.
Thou created earth;
Thou assembled your fleshes,
Thou counted your limbs;
Thou found thee unique, having given way,
God who melted the Double - Country. (Egypt)
Thou had no father who engendered thee when you came into existence,
no mother who gave birth to thee.... "
Manetho (or Manethon - Egyptian priest under Ptolemy Soter 1 - 300) asserted that Ptah reigned over the people for more than 23 000 years.
(In fact, much more. We know how much our chronologies are truncated.)

Hymn of Souti and Hor to Ptah.
Ptah is "defined" by H. Blavatsky, in Theosophic Glossary, page 307, as:

" The principle of Light and Life through which the creation or rather the evolution took place; the logos creator, the Demiurge....
This very ancient divinity is the " donor of life ", the born from himself, the father of Apis, the sacred bull, conceived by the intervention of a sunbeam....
Herodote said that he is the father of Cabeiri, the mysterious gods and the Targum of Jerusalem tells:" the Egyptians gave to the Wisdom of the First Intelligence the name of Ptah ".
He is thus Maât, divine wisdom and also Svabhâvat, substance which creates itself....In the Book of the Dead: " Ptah father of the fathers and of all gods, genitor of all the human beings produced by his substance ".
So Ptah is not only one more Egyptian god, a god of province or still just a master of a profession.
I suggest you discovering "another" Ptah, Ptah of Fire, Father of the so secret Alchemy, passed on the Initiated by him, then taught by Thot and his faithful followers and to penetrate into the world OF THE Divine Fires.
(If it's not already made, please refer now to the message on the Fire element).

II - PTAH, GOD OF FIRE
As I have already underlined it in Ptah god of Fire 1, Ptah was quickly assimilated to the divine Smith, him whose house is Celestial and Sacred Forge, Palace of Fire as his golden garment, sacred flesh, inalterable, vital fluid of any Existence. 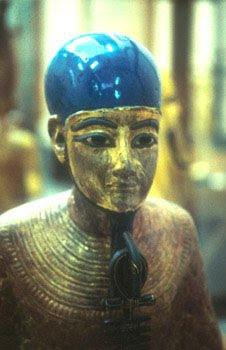 His headgear, black, blue or green, evokes the thousand petals chakra, (7th chakra at the top of the skull) the immutable knowledge, so vast that it can't be apprehended by the Human beings.

The Djed/Uas becomes the persistent, repeated, infinite, eternalKundalini.
Behind the visible rigidity, hides the Lifeblood, which creates, with its unchanging powers, (that's why righteousness) creatures and universe.

So, the basic study of the symbols masks another reality: Djed personifies the stability, certainly, but especially the absolute necessity of a permanent opening of Consciousness. To rule his creation, or as for Pharaoh his people, it is advisable to develop the Vision and to maintain it stable.
The perception of the future, the wisdom, to discern beyond the veil, to feel which right decision to make, to hear the Gods and their desires, all this comes with the Kundalini.
(See the messages bout the psychic powers)


Ptah holds between his hands the High Level of Consciousness of Egypt, Heart, in these ancient times, of the planet Earth.
That's what the Djed embodies.
Immediately, the holy day of Heb Sed gets another importance: certainly, it celebrates the Pharaoh's jubilee, but it is especially the Erection of Djed, the vertebral column of the country, of the civilization, of the man and his cervical vertebrae pointed up by the 4 " superior floors " of the pillar, beginning of the Great Awakening.

Ptah stands among the men.
Certainly on a base, wisdom of Maât, but among them.
He is a mystagogue, the one who teaches mysteries, the Grand Mysteries to the Initiated who were then responsible to educate the populations, to teach them by symbols, metaphors, allegories...
Ptah passes on a direct knowledge.
Him, the Grand Creator.
But how does he make?
He thinks at first, weighs in his heart. He "imagines", he "dreams" about his Creation.


Then he gives her flesh by naming her.
Note here the importance of the name. It's what will define forever the being. From where the secret names of the Gods, known only by them.
(Think of the legend where Isis, very mischievous, obtains the secret name of Râ and consequently almost all his powers)
Finally, by the breath and the activation of the DNA (do not forget that Ptah is firstly Enki, great geneticist), Ptah offers them vitality and independence.
Ptah carves his creation, polishes his "creatures", he is the sacred Artisan, the perfect Art Cabinet maker.
So, the smith became for the men the symbol of the inner spiritual being, the one that we always carry in ourselves, who little by little spreads and absorbs all what remains.
This state is directly connected to the internal alchemy of any process of transformation.
That's why the divine Forge is sacred, inaccessible to the human being. There, the Creation, is perfected, the souls are transmuted, there takes place the transubstantiation of any metal, element, material and also DNA, because the DNA is Fire, fire of life, fire of knowledge, fire of truth.
Remember Thot's teaching:
to overcome the inferior principles, it is necessary to use the superior ones. Use the force (the energy) at a higher level, to transmute it, to alchemize it.

The metamorphoses of Ptah are infinite.
You henceforth know that the Gods also are always in personal development,evolving, advancing, progressing.
Even if they have 500 000 years of advance on us or still more, they pursue their journey, always higher towards the House of the Cosmic God.
He is Sokar, Osiris, Tatenem, Knoum, he IS.
He asserts himself as Genius, not the one who appears from a lamp that one impatiently rubs, but Divine Genius, who embraces all the materials, all the domains, all the realities.
He is capable of coming down in any material, then of transforming it into perfect art, as the alchemist applies his V.I.T.R.I.O.L with accuracy and expertise.
(Ndt : V.I.T.R.I.O.L = Visita Interiora Terrae Rectificando Invenies Occultum Lapidem = sulfuric acid)
In fact, the alchemy is the tangible manifestation of all the spiritual and emotional transformations. Moreover, Patrick Rivière aptly explains that the principle of the alchemy and thus the "R" part of the acronym Vitriol, means " to rectify".
To transmute the cruder, the slower, the most cumbersome particles (emotions, feelings, traumas, engrams.....by analogy) which hinder the process of revival. And this can only be made by the FIRE. And thus invert the process, exactly as in occult psychology: a defect is nothing else than a badly expressed, badly channelled, badly used quality. But it is necessary to begin at first with the defect to awake the quality, which then, will become, "innate".
Exactly as the lead changes into gold.
Qualities and defects take root in the same emotional base.
It is also interesting to note, coming back to the alchemy, that the Egyptians called the Philosopher's stone, the STONE of MEMPHIS, Memphis, Mena-Nefer, which was the sacred city of Ptah in Egypt.

The sacred fire coils itself around itself. Kundalini. Snake of fire which slumbers before the Big Day.
Ptah is the Master. Master of the igneous fire that is the Snake, like for the Chinese the Dragons are, for some of them, of the fire, for some others, of water.


So, Ptah gathers all the fires within him, from the primordial one to the igneous one, from the celestial one to the earthly one.
To apprehend this, I repeat, it's advisable to forget what we learnt or rather to understand that, as for any thing, nothing exists without having its soul's or being's elevation.
Crasselame already in his text " The light taking out by itself from darkness ", wrote, in 1666:


" It is indeed another Mercury and another Gold, about which heard Hermes; a wet and warm Mercury, and always constant to the fire. A Gold which is any fire and any life.
Such a difference is difficult to easily distinguish between those vulgar who are dead bodies deprived of spirit, instead of ours who are always alive physical spirits ".
Or still, always in the same work:


" Who would believe finally that in the center of our earth was a fire,
the true vehicle of the light, which is neither voracious nor consuming,
but on the contrary which is nourishing, natural
and the source of life and action from which engenders from the bottom of the philosophic sea
the true salt of nature, and that there is at the same time within this virgin ground
a true sulfur which is the Mercury of the wise men
and the Philosopher's stone ".
And so, contrary to all appearance, what surrounds us is an incomplete manifestation.
To perceive the global reality of the tangible manifestation, it is necessary " to understand the Gods ", to revere them, to open one's chakras and to develop one's psychic powers.
So, will show itself the perfect trinity which already lives in us, the Knowledge of the Creator Fires, those of the Body, of the Soul and of the Spirit.