" It is true thing and without any lie and very sure,
that the high is of the nature of the low and the ascent the descent.
Join them by a path and by an arrangement.
The Sun is the Father and the white Moon is the Mother,and the Fire the Governor.
Make the subtle big, make the subtle thick, so you will have the glory of God ".
Hermes Trimegistus
(source : le livre de Thot-Hermès le trismégiste - René Lachaud - Editions Ramuel).

We have reached here the end of the study of the trilogy Ka-Bâ-Akh, and in the next message we shall open the heart chakra.
It is always essential to understand what we do, what the words mean, the essence of words and chiefly, to what our mental associate them.

It is always risky to take the occult teaching literally.
Not only, - we henceforth know, because it was deliberately deviated by the enemies of the human race, but also because it often expresses itself by allegories, metaphors, aphorisms...
Thus it is necessary to penetrate into this world with openmindedness and to develop as quickly as possible one's analogical understanding.

involves to read between lines.
And this, at several levels, this text carrying different truths for every subtle body, for every plan of consciousness.

Concerning the physical-etheric body, Hermes explains to us here that the high chakras (6th and 7th) move in cooperation with the lower one (1st), that the opposite also is true, and this to do " the miracle of one only thing ": merging in the heart chakra.
If the snake of Kundalini slumbers in the first one chakra, its head when it raises itself joins the 3rd eye and at the same time crosses Sahasrara, the 7th, the one with thousand petals.
The vertebral column, in its suppleness as in its shape, embodies the snake, its " osseous reproduction ".
Look at the Sumerian tree of life and notice the three essential stages: 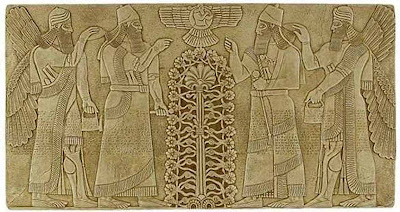 first knot : root, base of the trunk, Mulhadara chakra, there the snake slumbers


second knot : the heart, Anahata, note the junction symbol, where everything is connected and is really bound
third knot : the head, Ajna and Sahasrara, which work together.
Let's see it and the Anunnakis with their eagle suit .
(I put a red point on "knots"). 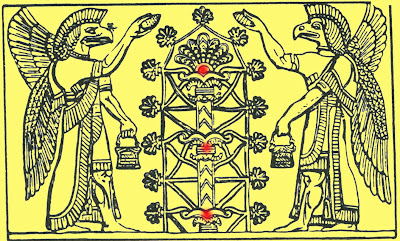 You see at the top of the tree, the deployment of energy which is equivalent at the same time of the lotus with thousand petals and of the winged heart, symbol of the accomplished soul.

Moreover, the Egyptian yoga, the oldest one which is previous to that of India, is a standing yoga, a yoga which intensely makes work the vertebral column and consequently the kundalini. The Egyptians had understood it :
only the occult power gives some power in this low world .

money is stolen or lost, careers stagnate or collapse, health decreases, the vital functions too, but
the occult power is eternal.
It becomes one of the multiple facets of Ka-Bâ-Akh, of the divine diamond in each of us, and these powers, we shall get them back again in our next embodiments as "gifts".
If there is a discipline, an art, a vocation which remains beyond the current existence and which is worth making numerous efforts, it is the occult power.


The Gods are the Gods because they developed 100 % of their brain, 100 % of their occult capacities, and because still today they work to get more power, more speed, more focusing, gifts, strengths.
We have at our human level to copy them.
The Gods are our examples, our emulations, our motivations.

When you will begin to have hot flushes out of meditations, when you will be hot at night while it freezes outside and you will awake sheets and covers fallen on the ground, then you will know that your heart chakra is opened.
As soon as Anahata is awaken, everything becomes possible.

The kundalini appears little by little from a long sleep.
Then, everything happens according to the deep desires of the being, to one's occult and physiological structure, and according the time which is dedicated to meditations.
But, be sure, if you work every day with Enki/Ptah, if you make a rite to ask for a guide and progress in confidence towards them but also towards yourself, you will awake your occult powers quickly.
But be careful, to work on a daily basis.
If you work as a tourist, eventually, it means coming down from a train and ending knock out while you thought being on the platform !

To be ready for the meditation, we have to apprehend the Akh.
This will be simple, because logical and already alive in your mind.

The Akh (or Akhu) is represented under the shape of a bird, however bigger than the Bâ, but which is not the Bennu, nor the Ibis of Thot. Akh is an ibis with egret in constant and direct connection with the Bâ.
It is by this link that the spiritual completion manifests itself. 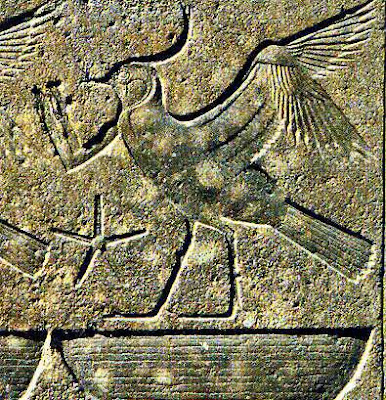 The Akh is the spiritual liberating radiation of our inner prisons, of our false beliefs, of all our errors.
It facilitates in each of us, what the alchemists call Spagyric and separates, in a way, the good from the bad, the vile from the pure. It is, we could say, the gold which shines under a mud puddle.

Consequently and quite naturally, Akh fights the dark forces which are hidden in our unconsciousness, fights against everything preventing the free circulation of energy in our bodies, and finally develops the bio-electricity of the being, one's magnetism.
Finally, Akh is the Fire of the Spirit.
Here is this fire of Knowledge which was stolen by Prometheus from Zeus.
Look :
Everything which exists possesses a Ka-Ba-Akh.
From the Gods to ants.
Even objects, which naturally have no souls, are always surrounded with a light radiance, their aura.

Thus there is the great Ka, Ka of the cosmic god, the great Akh and the universal soul also, the Great Bâ.
The Primordial Gods, appeared from the Consciousness Source, are obviously adorned of much bodies and radiances.
Also the Gods born from Ptah, then the human race.
The Akh develops as the other bodies, and the most the human beings open their consciousness to the authentic divine reality, the most the Akh expands while nourishing consequently the Bâ, the Ka and the Khat, the human body.
Some assimilate the Akh to the causal body. Others to the Buddhic body.
Akh is for example, the completion of Odin attached to his tree in search of the knowledge of runes.
It is extremely complicated to understand what the Egyptians really wanted to express.
Especially because we are accustomed to speak about 7 bodies and not about 9.
The Ren, Ib or still Khaïbit aspects can mislead us.
So now I suggest you a brief summary about the 9 Egyptian bodies.
I deliberately glimpse through certain bodies. It is already vey complex to make the equivalences. There is no need to overweigh our mind with useless information for now.
In particular for awaking the heart chakra.

Article plus ancien Accueil
BLOG IN PROGRESS - THANK YOU !