THE ERECTION OF DJED 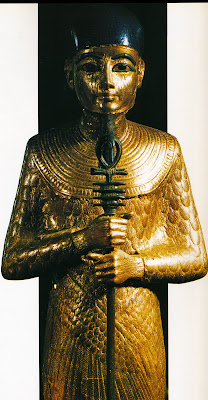 When the God Ptah proceeds to erect the Djed, he ensures the stability and the longevity of power. Ptah, particularly revered in Memphis, was considered as God of Goldsmith. That makes sense.
He is the Creator God, he generates all other gods and men too, he is coherent that he embodies all creators. The Goldsmith, but also architects, artists and many others.

Ptah keeps in both hands the pillar Djed surmounted by the key to life, the Ankh. By clicking on Ptah, the image will enlarge. You will distinguish the Uas scepter , the stick topped by a head of dog, great symbol linked to Anubis. Thus Ptah, God of gods, rules over all worlds. The Uas evokes his power on "Worlds from below" as the Djed evokes his power on Heaven and Earth.
The Uas is given to the dead to ensure them the benevolence of the gods and a pleasant life in the hereafter.

The Djed in its upper part is formed of four horizontal platforms, just as stacked vertebrae. Hence the idea that it can represent the spinal column of the god Osiris. In the book “le livre des Morts égyptien De Grégoire Kolpaktchy, éditions Dervy,”, you can read about the amulet of Djed, page 272, a "call for Osiris:


Stand, O Osiris!
Your spine, you now possess
God-with-fixed-heart
Your neck has been consolidated and strengthened
Go up therefore on your pedestal, O Osiris!
Here I poured lustral water on your feet
I bring you a golden Djed
Be joyful, O Osiris, in the sight of this magical image. "
We know that Ptah was also for a long time associated to Osiris.
Let's keep in mind that the Djed is not only stability but also assurance of resurrection, endless life, incorruptibility, and inexhaustible strength.
That's why the gods had always with them the Djed.

Thus, a Djed placed on the neck of the deceased, the day of the funeral, assured him to become, “in the World of Below" a holy and perfect Spirit, explains Gregory Kolpaktchy.
"And on the day of the year, he will be similar to Spirits of the entourage of Osiris, really, constantly, forever ... " 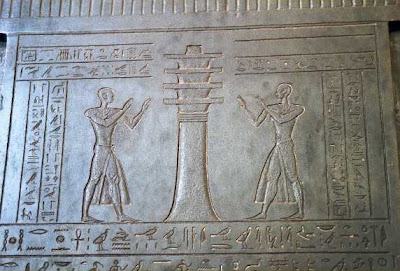 On an occult plan, the Djedi topped by Uraeus symbolizes the Kundalini, the occult power of Being:
vertebral column and third eye.

In addition, you will have noted that Ptah always appears tight as a mummy in a shroud of gold feathers. He wears a faience headdress (blue or black) and dresses, also the big magic gorgerin (wide collar).
He is very straight. Very, very straight, vertical.
Now, we know that the development of the human brain is concomitant to the vertical position adopted by the Man. The straightness of the back facilitates the circulation of energy in the spine-Kundalini. The more the man is vertical, without rigidity, the more he is opened to awareness and perception.
Thus it makes sense that Ptah, Great Creator, was upright and well built.

The Djed is also a representation of the Tree of Life , the Anima Mundi.