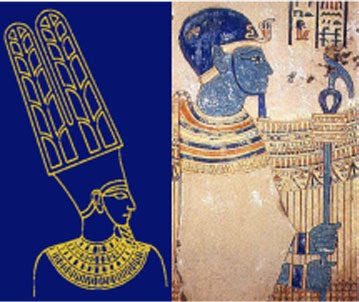 In this Creation which the Man cannot apprehend in its totality because his limited mind, the God Creator commits himself.

Or he makes his creatures, in particular the human race, on his potter's wheel, such Knoumbelow or even Ptah 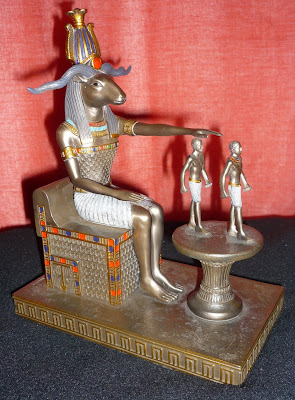 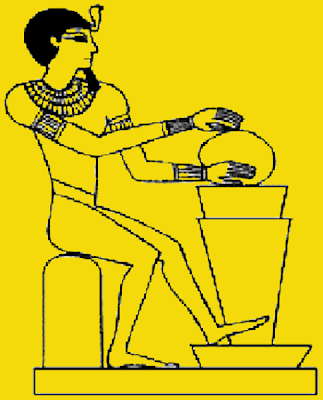 and which reminds the first genetic manipulations led by Enki and Ninoursag, " Sumerian potter's wheel ". (do not forget that Sumer precedes Egypt)

or he directly gets involved, fertilizing with his own seed the appointed "matrix", what evokes the sexual intercourse between Enki and Dawn and Dusk from whom descend the sapiens-sapiens, in other words, "us".

The Egyptians, in these times, felt at ease with the sexuality, the sex and the natural pleasuresensuing them. They did not delude themselves about the way the Gods fertilized.
The representation of the God Min (who is Amon-Ptah) lets no doubt on his capacity to engender.
(Min is on the left side of the fresco) 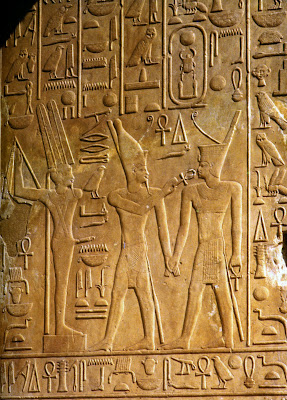 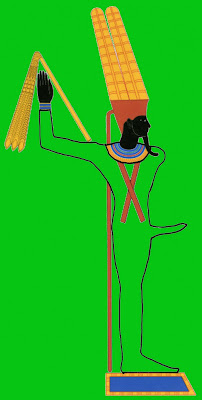 The divine Phallus erects and fertilizes.
This reminds the lingam of Shiva when he penetrates into Yoni.
(Do not forget that the 3rd region, the Indus valley, received the civilization by Enki, via Inanna. Hence the obvious resemblances with what we see now).
So, since a long time, the Gods, the Creation, the Men and the birth of everything are connected, interpenetrate, each ensuing from the other one.
Always the same notion of Creator, of " god potter ", which ceaselessly returns: Amon-Min; Amon-Ptah; Amon-Ptah-Tatenen; Amon-Knoum; Amon-Râ.
Except for Râ, great solar god, who, really is Marduk, son of Enki/Ptah, all other associations have a unique source: Enki.
Below: Amon-Ptah (Ptah put on with Amon's feathers). 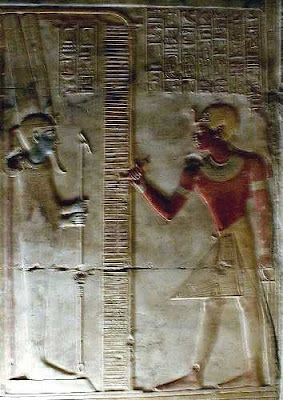 Amon ( Amun) is one of the more ancient Egyptian Gods.
More than a God, he is " king of Gods ", Absolute Divine Principle, Father of Gods, Benevolent Creator of Humankind.
Amon is " the One who lives in the Heart ".
He is the sacred breath which animates everything, the air, the wind.
The approximative translation of his name is " the Unknowable ", " the one who is hidden ". That is why he takes human shape to show himself. He cannot be "seen" as such.

The term of " Amon " crossed the ages.
It became " amen " in the christianism which stole everything from Ancient Egypt.
The sound " Amon " (of which the "o" pronounces like the English "u" in " duck "), strongly and correctly vibrated is the mantra for opening the heart chakra, with Ptah.
So Amon is the force of Creation, the Great Primordial God from whom everything appears, famous "Noun Primordial", Ptah.
The worship of Amon expanded and was associated even likened to other Great Gods when Egypt was freed under the XVIIIth dynasty of Hyksos.
Touthmosis III especially, quite particularly revered this divinity.
( Below: Amon in blue, Pharaoh and the paredros (greek word meaning "sat near") of Amon, Mout). 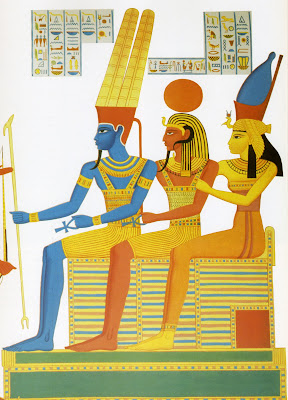 That's why Amon was also the God who frees the oppressed, the poor and the unfortunates.
When he appears, always under human shape (rarely under animal shape if it is not in ram or goose), Amon has put on his head the two big sacred goose quills, symbols of the worlds duality. (and animal of Amon).
(Below Amon-Knoum).

But also obvious symbol of the opening of the crown chakra, the thousand petals chakra, "antenna" and direct link with Heavens, the divine " above ".
(Below the coronal chakra (of the head) seen by the Buddhists, in the center, a "traditional" vision, this chakra is always filled with gold particles, and finally to the right, Amon and his "feathers". You will doubtless make the link with the so-called halo of "angels" and the papal tiaras...) 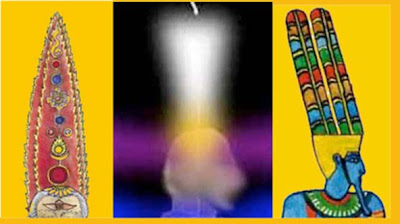 Amon's hymn evokes the kindness of the Creator towards the Human beings.


Ô Almighty Amon,
Thou who answer the prayers of the unfortunates in distress
Who restore breath of life to the unlucky
Thou are Amon, Lord of Silence
But when I call Thee, in my distress,
Thou come towards me and save me
While us, Thy servants, are tempted by evil,
Thou, Great God, Thou are only forgiveness
Thy breath is for us only pity ".
Later, the Greeks, always prompt to get back, decided that Amon was Zeus, because he was full of generosity and benevolence.
I had not perceived so much love in Zeus...especially when he condemns Prometheus to a horrible and eternal torture just because he wanted to teach the men... Zeus worried to compete with the men ? Hum, hum...

Later, Amon, Râ and Ptah were gathered in a powerful trinity to which were dedicated numerous hymns and prayers. A distinct trinity and higher than the other gods.
The return to the great divine principle was accomplished.
Amon-Ptah, the body and the spirit. Râ, the solar breath which warms the creation and offers it vigour, health and longevity.
" The one who cannot be known is Amon,
he shows himself with the face of Râ,
his sacred body is Ptah... "
Amon-Râ, once more, was reputed in whole Egypt and beyond for his compassion to the human race and because he concretely answered the prayers.
(What is a stunning characteristic of the Nephilims).
Amon-Ptah was also worshiped in Syria, in Nubia, in Sudan, in Palestine.

II - THE COLOR OF THE PRIMORDIAL GODS
Besides gold, naturally, the Blue unifies the primordiality of the gods Amon and Ptah/Tatenen.
This color is the one of kings, power and divine royal strength.
But it is especially the one of the ocean as of the sky.
Thus the Blue embodies the union of the Yin and the Yang, of the Lingam and the Yoni, of the God Creator and his paredros for a grand and cosmic fertilization.
So, the return to the Primordial Noun comes true easily: Ptah is the Grand Noun, himself Father and Mother of everything, great father, who introduces his seed in the Matrix Mother.
Amon, great divine principle with blue skin, joins both universal major principles of creation.
The Blue is at the same time the origin of the Source and the return to the Source, such the inhale and the exhale of the Gods.
Here Ptah and his double Tatenen receive offerings. 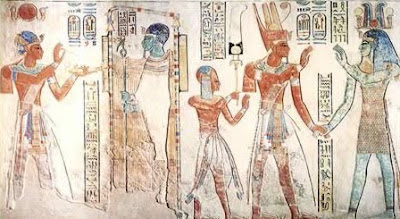 Tatenen, with " beautiful face as Ptah ", is Ptah.
Note his blue headgear which reminds the blue cap of Ptah. 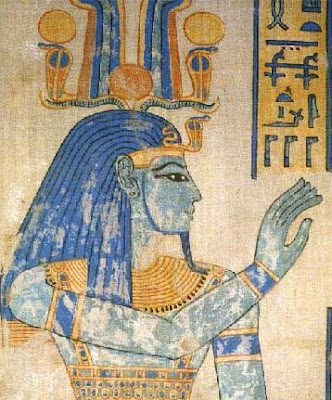 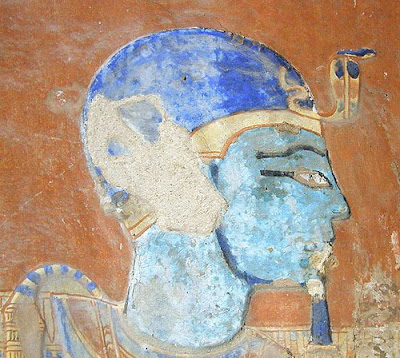 Amon and his blue body, his favourite blue is the indigo.

Two messages will follow, directly connected to this one:
The first one will treat the sacred birds, among which the goose, the sacred animal of Amon.
We obviously shall make the link with Sokaris, the other representation of Ptah.
The second will give all the possible information for the opening of the heart chakra.