DISCOVER SUMER
To contact Enki, it is important to know his history, his creation, his universe.


Sumer was one of the greatest civilizations never equalled, mother of Egypt, cradle of history, cradle of civilization.
Sumer was born in southern Mesopotamia, in these lands known nowadays as Iraq.
The “cradle of civilization” takes place in the Bronze Age and, in addition Sumer will receive afterwards the Akkadians, Babylonians and Assyrians.
Mesopotamia known in these old days as "the country between the rivers" corresponds exactly to Iraq, adding a large part of northeast Syria and southeast Turkey.

So the Sumerians, by the way a non-semitic people, settled in the south of Mesopotamia 4000 years BC and poured on this country and beyond all their know-how, their expertise.
(Ndt : BC means Before Christ) 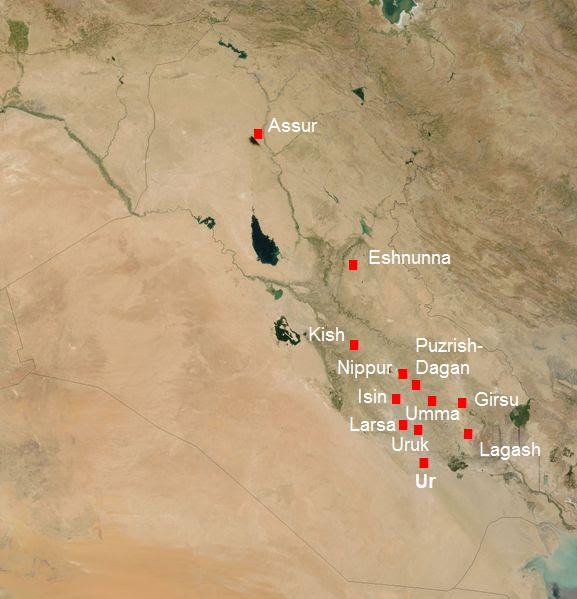 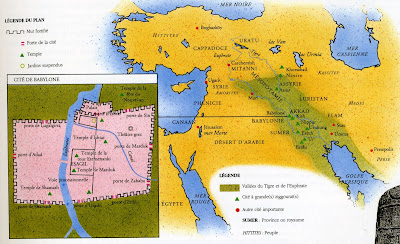 Moreover, still today, we speak about the "fertile crescent", and this name comes directly from the incredible development of civilization, which took place in Sumer. 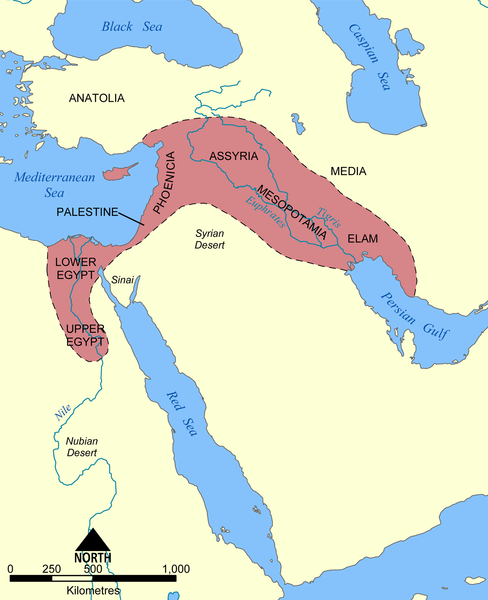 The Sumerian civilization has so much impacted on the world, for over 3000 years, and remained, on the socio-politic-religious level but also artistically and technologically, the fundamental basis of the Mesopotamian civilization.
The cities in Sumer were "city-states”, independent in their decisions, governed by a tutelary deity in the early 2900 BC.
Temples were erected to the gods, sowing in advance, the incredible Egyptian constructions to come.
In Sumer was invented the writing in 3300 BC. In fact, the first signs of this writing are found on artifacts from 5000 BC. 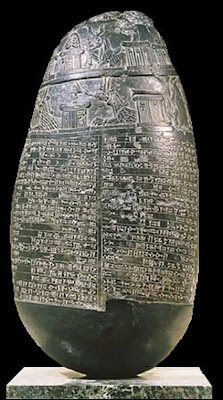 The Sumerian writing is constituted by cuneïforms characters and is sculptured most of the time on tablets of stone, metal or clays.
There, the already erudite scribes testified of their very advanced civilization. I recommend you to visit this website because the images about Mesopotamia are very beautiful. 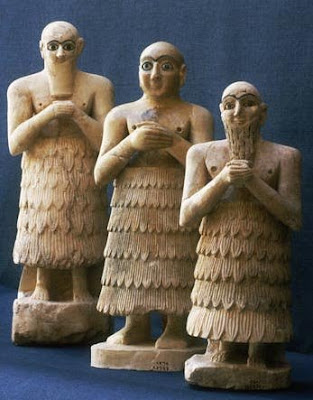 The archives of the temples and libraries of the cities as Babylon, Ur or Ninive delivered an important mythological corpus with their epics of semi-divine beings, their legends and their hymns in the glory of the divinities.

The theogonic and theological Sumerian system, very well built, became the foundation of the beliefs and the dogma of the whole ancient Middle East. Because, despite the multiple divinities, it remains coherent, homogeneous, easy to understand and offers the vision of an harmonious cosmic order. And this, to the contrary of the Babylonian myths, which followed and brought a growing disorder in the beliefs and the worships.
For the Sumerians, Ea was the Creator God, the One who creates. Also known as Enki. As the direct creator of the human race, Ea / Enki himself personally transmitted directly his knowledge and his powers, without intermediaries. He loved very much his creation and developed with the Man a very close relationship.
I will develop the "myth" of Enki in the next message.

Back for now to the Sumerian civilization.
Besides the writing, it offered to the humanity an architecture, evident base of the future pyramids.
Here Ziggurat of UR.
(photo Wikipedia )

So, the Sumerians built the "Ziggurat", sort of " tower-temple", with a specific pyramidal shape.
The most surprising, is that a bank in the United States, in Sacramento, California is exactly built on this model. 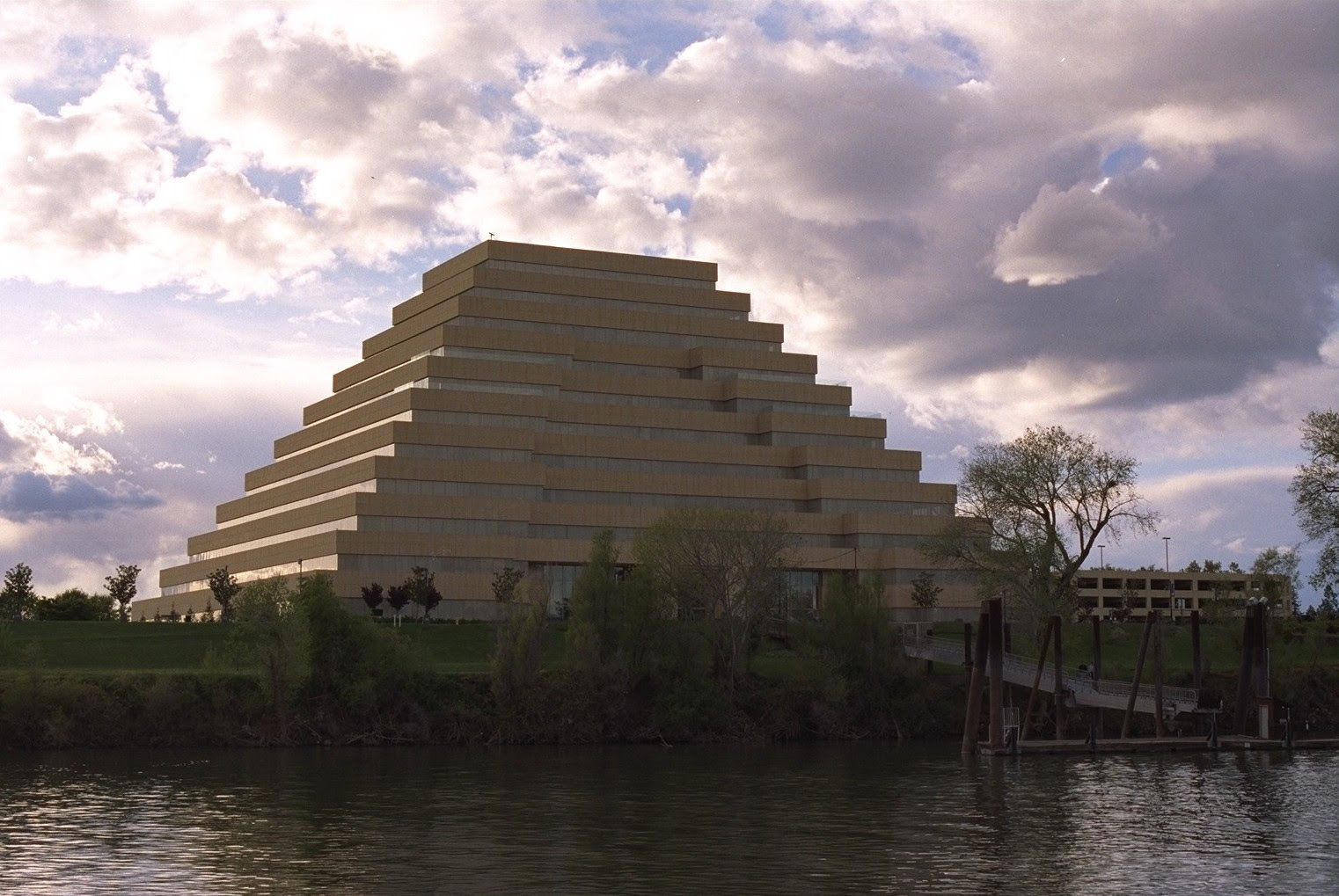 Photo wikipedia
This pyramid-shaped building, furthermore near the water, should bring to the bank abundant wealth. Has the bank been taken in the "subprime’s storm"?

These Ziggurats were built later by the Babylonians and the Assyrians.
The Sumerians, precursors in this domain as in many others began to build them from 4000 years BC, more than 6000 years old, today!

The summit of the pyramid was flat in contrast to the future pointed summit of the pyramids of Egypt. The various sides were built in different colours according to some astrological significance remained obscure. (for us).
These Ziggurats had no internal chambers, nor rooms equipped for the dead and important people as in Egypt. They had no place of worship, of adoration for any god whatsoever. It was the Ziggurat itself, which was the evidence beyond the ages of the veneration of the Sumerian people for their gods. The Gods were close to the people who contacted them without complicated hierarchy.
32 Ziggurats have been identified in Mesopotamia. 28 are in Iraq, 4 in Iran.

In Uruk, a Ziggurat has been called "The white temple of Uruk" because the temple was built onthe flat summit of the pyramid in order that it touches the Heavens.
Below the ruins of the temple. Then, its reconstruction.
(Www.brekka.net images).

The Sumerians and their descendents believed that these temples designed like giant stairs, settled a permanent link between Heaven and Earth, and thus linked the men to the Gods.

Another example of a temple is the one of ancient Babylon, the "Marduk Ziggurat" or Etemenanki.
Below reconstituted, (image of www.universalis.fr)

It is said that Etemenanki was painted with various colours, 7 exactly, of which the indigo.
"Etemenanki", of which name comes from the Sumerian, means " the foundation of Heaven and Earth ".
According to Herodote, every flat summit of Ziggurat received a grave.

This so rich period is also known as "Uruk Period".
Moreover , the necropolis of Our (or Ur) testifies of the greatness of the Sumerian civilization, with its thousands of richly furnished and decorated tombs. 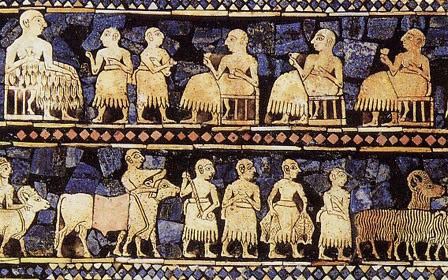 Sumer, in addition to mathematics, astronomy and also sexagesimal division of time and of the circle (60 minutes within an hour, 24 hours a day, 360 degrees in a circle) developed agriculture, the farm renting and the first irrigations, the awareness of the property, the understanding of the social life (the law and the order), the music.

The Sumerians enjoy the lyre, and the wind instruments. They created most of them. They enjoy dancing and are “bons vivants”.
Ea / Enki used to say that the man was his most wonderful creation. But no, he said, there is still more wonderful: the woman. That is why the dance was the prerogative of women, alone or in groups.

In fact, the Sumerians settled in Mesopotamia, the concept of comfort with the arrival of furniture, many of which are sculpted artistically. Even in the most humble homes, one finds seats, tables and layers that are no longer put on the floor.
Butter, honey, oil and wine come in the houses. From beds to fireplace, the Sumerian civilization brings splendour and respect for the environment. And an obvious economic and trade development.

Here's an interesting video: in English, naturally. It is really a shame that we can find interesting videos about fundamental questions only in English and in the Anglo-Saxons countries! Maybe there are no passions or experts in France, or very few people willing to share their knowledge.
And we still believe to be the torchbearers of the worldwide culture. It’s now a long time that nobody knows who we are. And obviously, it’s our fault...